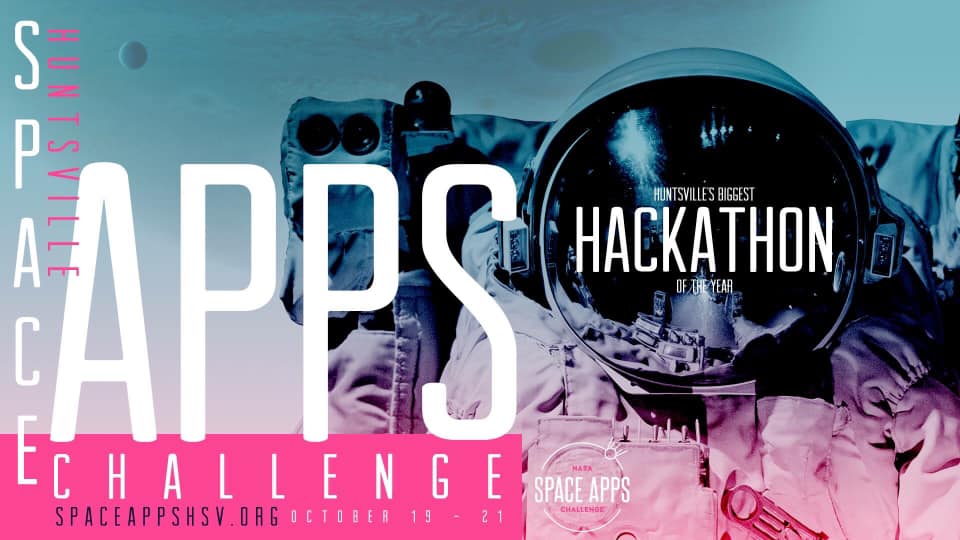 With a pronouncement of “We are going to be to space travel what the Silicon Valley is to electronics,” Dr. Deborah Barnhart, CEO of the U.S. Space & Rocket Center, launched a press conference Tuesday of global proportions.

Huntsville has been named as the “Mainstage” for the NASA International Space Apps Challenge, an annual worldwide hackathon. The Challenge is Oct. 19-21 and will feature coders, scientists, designers, storytellers, makers and builders who will address NASA-issued challenges on Earth and in space.

“Space Apps is an annual event … (held) at the same time in cities around the world,” said Toni Eberhart, executive director of Urban Engine, a local nonprofit organization aimed at accelerating STEAM-focused initiatives among the millennial startup community.

Last year’s Challenge reached more than 25,000 participants in 187 cities on six continents. The Mainstage sites were New York City and Palo Alto, Calif., but, this year, Huntsville is the only Mainstage and will feature local space and science professionals.

“We are honored to be selected as Mainstage and host this once-in-a-lifetime opportunity to engage the community in something that can have massive, global impact,” Eberhart said. “Honoring Huntsville’s legacy in aerospace and aviation is something we’re so passionate about.

“To foster education and team collaboration in support of Space Apps, we’ll be providing a wealth of educational workshops at CoWorking Night which is designed to prepare teams and refine skills they’ll be using during the hackathon – and everything is being provided at no cost, thanks to our sponsors.”

Mayor Tommy Battle, who was introduced by Eberhart as Huntsville’s favorite “double millennial,” said the city is the perfect site because “we’re on NASA’s mainstage to get back to the moon and go to Mars.”

“This is a challenge that is made for Huntsville … to see our millennials and ‘double millennials’ working together.”

Hal Brewer, co-founder and chair of Intuitive Research and Technology – one of the event’s presenters, said this is a chance for businesses to take part for team building and “international exposure.”

In fact, he called out some local companies to answer the challenge.

“It’s a great opportunity to foster STEM research,” Brewer said. “If you sponsor this, you’re going to be getting international exposure.”

The Huntsville/Madison County Chamber is also a presenting sponsor and is launching its new website – asmartplace.com – to tie in with the Challenge while helping with career exploration.

“The brand new asmartplace.com is the Chamber’s workforce development and recruitment initiative, focused on connecting students with a smart career and attracting smart people from around the world to be part of our dynamic and growing workforce,” said Georgina Chapman, workforce director at the Chamber. “We knew the NASA Space Apps Challenge would reach the most talented and motivated coders, creators and problem solvers in the world, and we’re thrilled to have the opportunity to reach them directly.”

Oh, the Horror! Cashing in on the Business of Zombies, Superheroes and Mystical...
Scroll to top