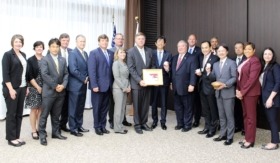 The delegation from the city, county and state visit Toyota officials. The group later met with Mazda and GE Aviation officials and will take part in the Southeast U.S./Japan Association meeting this week.

A delegation from Huntsville, Madison County and the state is visiting Japan this week to further strengthen the area’s ties with its international partners.

The team includes elected officials, Chamber of Commerce leaders and company representatives of Toyota Motor Manufacturing Alabama. On Monday, the team visited Toyota City and met with members of the Executive Team for Toyota USA.

“We have been traveling to Japan for many years, and we are pleased to be able to meet again with our Toyota partners in their home country,” said Huntsville Mayor Tommy Battle. “This provides us with the opportunity to tour their plants and facilities and to visit with our new partners at Mazda.”

The group also toured the Toyota Motomachi Plant and Toyota Kaikan Museum, seeing some of the company’s newest automotive technologies and smart cars.

Tuesday, the delegation met with leaders of Mazda.

“I can’t stress enough the importance of relationships in doing business with our overseas partners,” Battle said. “If we had not already established a long-standing collaborative relationship with Toyota, we would not have landed the new Mazda-Toyota plant.

“These commitments don’t just happen in 15-minute meetings or phone calls. There is a long process of communication, listening, and work toward mutual respect before we develop a trusted business relationship.”

Mazda-Toyota Manufacturing U.S.A. is building an automotive plant in the Huntsville city limits of Limestone County. The two companies will build the facility on 2,400 acres near Interstates 65 and 565. The plant will be able to produce 300,000 cars annually and employ about 4,000 people.

“These meetings in Japan with the Mazda and Toyota corporations have created an even greater sense of understanding of the partnership and commitment that has been created with two of the world’s most renowned automakers, while engineering, road design and site prep continues on more than 2,000 acres locally,” said Madison County Commission Chairman Dale Strong. “It is truly exciting to be one of so many working together at so many levels to ensure the success of the largest economic development projects in the history of the state of Alabama. This project will be a redefining moment for North Alabama.”

Production will be divided evenly into two lines for each company to produce Mazda’s crossover and the Toyota Corolla. Operations are expected to begin in 2021.

“The plant will bring thousands of jobs to our area,” said Chip Cherry, president and CEO of the Huntsville/Madison County Chamber. “We secured this new plant because of a trusted relationship we have built over many years with our Japanese partners. In fact, much of it goes back to Toyota’s engine plant locating in Huntsville nearly two decades ago and becoming a true community partner.”

Members of the North Alabama delegation will also meet with GE Aviation and NGS Advanced Fibers, their Japanese partner in developing the silicon carbide for ceramic matrix composites. NGS is in Toyama, where the delegation will tour the sister facility to the one being built in Huntsville. These plants are the only two in the world to mass produce silicon carbide and ceramic matrix composite materials.

The delegation will also attend this week’s annual meeting of the Southeast U.S./Japan Association in Tokyo.