Tell us about your very first touch with Town Madison and how you got involved.

We had developed a lot of property on Madison Boulevard that we still own, and we used to have offices out there. 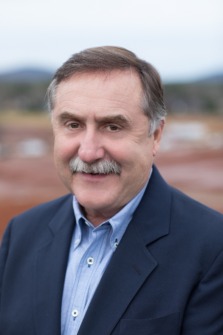 I was looking out the back window one day at a gorgeous tract of land I had my eyes on for a while. I knew Intergraph founder Jim Meadlock owned it and he didn’t need to sell it. But this day there was a tractor clearing trees! I’m thinking, “Holy smokes! I should have been calling on this property!’’

I knew Mr. Meadlock was a really nice man and I had his phone number, so I called him up and said, “Mr. Meadlock, did you sell that property because I see a tractor over there?”

He said, “No Louis, it’s just some farmers clearing trees for me. Do you want to buy it?”

I said absolutely, and negotiations started there.

It looks like such a huge and complex development. Did you know that going in?

Town Madison is actually a relatively simple development. Except for having to put in interstate ramps and things like that are complicated and takes a long time, but Breland has always done fairly large residential communities. My first Huntsville development, Autumn Ridge, is probably 800 homes.

I’ve watched cattle farms turn into major cities, so I recognized that Town Madison is in an incredible location – 2½ miles of interstate frontage and a gateway to the city. It had everything you could want in terms of a location. Town Madison started out as just a great piece of real estate at a great price.

Jim Meadlock and Intergraph owned most of the property and the rest was smaller parcels owned by four or five individuals, so we had to arsemble all of it.

You mentioned Autumn Ridge as your first Huntsville development. You came to Huntsville from Mobile?

I started a homebuilding company in Mobile in 1976 and we were building throughout Mobile, Gulf Shores and Baldwin County on the eastern shore.

A friend invited me to come to Huntsville around 1982 or 1983, to see all the activity. President Reagan had poured money into the Huntsville and Madison County market to support the military buildup for Star Wars.

The market was just exploding! The market is really good now; it was better then. There was very limited competition and there was room to put in subdivisions and build houses. And buyers were lined up.

Within the week, I decided to move here, and we closed our Gulf Coast operation. By comparison, the coast was a very tough market: in Baldwin County, you could barely sell a house.

From the day we started in Huntsville it was on fire – successful from day one. You had a tough market nationally but here there was a shortage of housing and lots of land available for development.

To get started in the development and home building business, do you just start buying land?

Correct. Within just a few months we bought a 400-acre tract of land on South Parkway (Autumn Ridge) and a big tract of land at Zierdt Road where the Edgewater community is now.

You have been involved in this part of town for a long time.

Wayne Bonner of Bonner Development developed Edgewater, but I was one of the first to buy land from him to build houses. Lady Anne Lake was just a bunch of trees back then.

Mountainbrook was one of the first developments at Edgewater. I bought 100 lots that became Mountainbrook and Heritage Woods.

What has it been like being in the homebuilding and commercial development business and still come out on top, with all the volatility over the years? 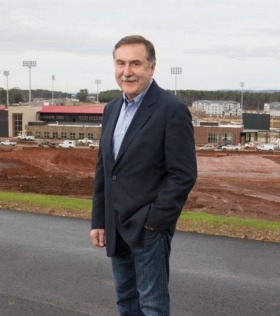 Louis Breland with Toyota Field in the background. (Photo/Steve Babin)

You have to remember, back then, interest rates and energy were not predictable. Oil goes from $50 a barrel to $150 a barrel; inflation starts in, the Feds raise interest rates and you go from 8 percent to 10 percent to 12 percent, 14 percent and then back to 10 percent. There’s nothing in the real estate business – nothing – predictable. It is always changing. But the difference between then and now, I believe, is that 100 percent of energy came from the Middle East and we had no real energy policy in place.

It was just crazy what fluctuations in energy and interest rates would do. It was always a roller coaster.

And interest rates are like oxygen for a homebuilder and interest rate volatility is very hard on us. It cuts off your oxygen and the higher the rates go – it starts choking you and you have no control over it – period.

Has the business changed much?

Back then there was no one to buy lots from. We bought 100 acres, built the lots, developed all of the infrastructure like roads and utilities; built the homes, sold homes, and we financed them. So we were very integrated – from raw dirt to turning on your stove for the first time at move in.

Now, if you just want to be a homebuilder and not get into development, you can just go buy lots from someone.

How did you survive the financial and real estate collapse back in 2006 through 2008?

I did not participate in that because I could never understand how somebody who couldn’t qualify to borrow $100,000 could borrow $100 million.

We saw some of it coming.

We owned one of the largest privately held self-storage companies in Alabama, Mississippi and South Florida.

In 2006, we sold it for almost $100 million, so we were very liquid. When it collapsed, we had a lot of inventory, but we were liquid, so we bought over 100 communities in great land locations out of bankruptcy at giveaway prices. And we did not go back into the market.

I told everybody here, “This is either the most incredible buying opportunity in real estate, or the largest sucker hole we’ll ever go through – but we’re going to go for it!”