As the city celebrated the 50th anniversary of the first moon landing the week and weekend of July 20, the state-of-the-art Huntsville Aquatics Center continued to help pump money into civic coffers and earn its high price tag.

The center, which re-opened in 2017 after a $22 million facelift of what was formerly called the Natatorium, hosted the Southeastern Long Course Swimming Championships. There were many ribbon winners among the 1,180 contestants, and city vendors also picked up some gold.

According to Huntsville Swim Association coach Matt Webber, the meet was worth an estimated $1.8 million to the community in money spent at hotels, restaurants and other daily expenses during the event.

“From the time this facility was built, the figures since 2017 are $8.4 million in revenue,” he said. “As far as sports go (in revenue for the city), it’s up there. It’s easy to get into the city, it’s a big venue. It’s among the best in the country.”

While the HAC is a drawing card, the city itself offers visitors to the various meets held there plenty of entertainment. 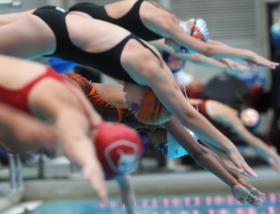 Mike Herndon of Mobile, who has travelled with his family to Huntsville meets for several years, said the Space & Rocket Center alone is worth the ride from the coast.

“While my younger daughter competed in the meet, my older daughter was interested in the Apollo 11 festivities during the weekend,” Herndon said. “She has an interest in rocketry and plans to study engineering in college. UAH is among the schools she is considering.

Herndon said the family has visited venues such as TopGolf previously, hits familiar restaurants each trip and this year went to Pints and Pixels to let the kids “play pinball and video games” while also eating.

Meanwhile, Webber said families who come for meets at HAC are “amazed” with not only the facility but the city.

“They’re amazed at how friendly the town is and how the city supports swimming,” said Webber, a Chattanooga native who has been at the helm of HSA for 10 years with previous stints as head coach in his hometown and Birmingham. “The center is unmatched, really, and this is from someone who goes to a lot of meets.”

Herndon, who also attends a lot of meets, said Huntsville has something to envy.

“It’s definitely one of the best places we go for meets,” he said. “The Aquatics Center is wonderful. While there isn’t enough parking, the shuttle service from Milton Frank Stadium is quick and well-run — they use enough buses to keep people from having to wait long, if at all. It’s pretty easy to get around (the city) and there’s plenty to do in your down time.

“Swim parents from Mobile dream of seeing something like that built in our town one day.”