Downtown Huntsville has a different look as the area evolves on a daily basis.

New store fronts are joined by new hotels and new restaurants as the city continues to build as the population grows. Nothing seems constant in the Rocket City lately except for one thing — cranes filling the skyline. 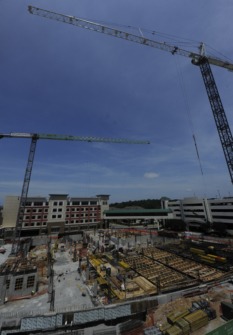 As one crane comes down others go up in the downtown area alone. This summer up to nine cranes were spotted on the Mazda Toyota Manufacturing USA campus as the car maker expands in the western part of the city.

Cranes recently went up where Huntsville Hospital is building its Orthopedic and Spine Tower and Shane Davis, the city’s director for urban and economic development, said more are literally on the horizon.

“There will be more in the next few weeks,” he said.

Two new parking decks. Three new apartment complexes. Four new hotels. New retail space totaling 50,000 feet. The city is getting a facelift, and construction cranes are now and will in the immediate future be familiar to Huntsvillians.

Constellation, a $180 million project that will have 1.5 million feet of mixed-use space for apartments, hotels, retailers, offices and parking decks, is about to become reality.

“Constellation is breaking ground in October,” Davis said. “It’s been talked about for years and it’s been approved.”

Huntsville developer Scott McLain has partnered with Equibase Capital Group LLC of Chicago to build Constellation at Memorial Parkway and Clinton Avenue. The old Heart of Huntsville Mall was once located at the site.

Davis said any fears of an economic downturn nationally hasn’t slowed down city planners’ ambitions to continue to build and recruit. He said he’s convinced Huntsville has “insulated” itself from talk of a coming recession.

“That’s why we’ve had the FBI, Sanmina, Blue Origin, Mazda Toyota and others come here,” he said. “We’ve put in place an economy that to get to its full strength is half a decade away.”

The economy is one draw for Huntsville. So is what Davis called “quality of life stuff” such as the VBC, Botanical Garden, the Space & Rocket Center and John Hunt Park.

And the ongoing building is part of a plan that began taking shape over a decade ago.

“Whole Foods,” Davis said. “I told the city council that (retail center) could be a catalyst to clean up the Parkway. If you think back to 2008 when Tommy Battle came into the mayor’s office, we began concentrating on the square.

Davis said residents will continue to see changes from downtown to Mastin Lake in northwest Huntsville.