A locked door is intended to keep people out, but when a building is on fire, that creates a problem. Now, business owners in Huntsville have a solution. 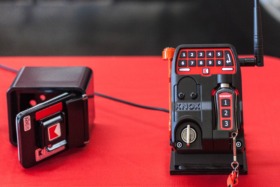 The electric rapid access system consist of a lockbox used to store keys, like the device on the left, and a base unit that stores the e-key to allow firefighters to have access to the box. (Photo/Jonathan Stinson)

The City of Huntsville has partnered with the Knox Company to implement an electric rapid access system, which is designed to give firefighters access to various businesses should the establishment be closed or the doors locked when they need to gain access to fight a fire.

“What we’re actually doing is we’re making it a better system of firefighting for our firefighters by using technology to save buildings, to save dollars, to make sure we can make our community as safe as possible,” Huntsville Mayor Tommy Battle said. “We looked at this for two, three years. We ran some pilots on it and after we got finished with the pilots, we thought it was a great system.”

In 2018, Huntsville Fire & Rescue responded to 9,800 calls to during the evening or weekends when most businesses were closed.

“You know the big fires we go to, when they’re big and we get there, we know what we have to do, Huntsville Fire Chief Howard McFarlen said. “A lot of the times we just do a forceful entry and we take care of the problem. The ones we worry about are the ones where you pull up and there may be a small incipient fire somewhere in a business that we can’t see from the outside.

“… We don’t see any signs from the outside that warrants us to break down doors, so we’re kind of in a ‘Catch 22,’ but we can solve that now.”

The electric rapid access system is simple. A business owner purchases a lockbox from the Knox Company and stores any keys emergency personnel would need to access the business in it. The boxes start around $550 and increase depending on size and the exact configuration. Exact pricing and specifications can be found at knoxbox.com/huntsville-al.

Then, once the box is installed, local firefighters would have access via an electronic key.

The key is charged and programmed via a base unit and, according to McFarlen, if the key isn’t returned to the base unit within about 30 minutes, then it becomes a paperweight.

So, if the e-key gets left behind after a fire, someone walking along would not be able to access other key boxes with it. 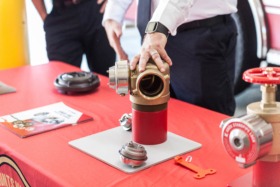 The tamper-proof silver cap is designed to go on the fire department connections at local businesses to ensure the system hasn’t been tampered with and functions when needed. (Photo/Jonathan Stinson)

There is also a record kept in the cloud any time an e-key is accessed.

These caps are designed to protect the integrity of a building’s sprinkler system and ensure firefighters can get supplemental water when they need it.

It also eliminates opportunities for vandalism and damage to the sprinkler when a connection is uncapped and ensuring the sprinkler system is operable when they’re needed can reduce the overall long-term disruption to an affected business, according to Knox.

Information about the Fire Department Connection caps can be found at knoxbox.com/huntsville-al-fdc.

“Addressing fire and life safety issues is a priority for us,” Battle said. “I am proud that Huntsville is the first city in the nation to implement both of these programs, reinforcing our commitment to be a leader in public safety.”

Acclinate Seeks to Educate Minorities on Importance of Clinical Trials