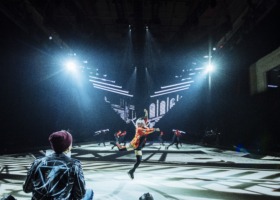 Starting out as a group of 20 street performers in 1984, the company eventually blossomed into the Cirque du Soleil Entertainment Group.

And, for the past 35 years, Cirque du Soleil has been taking its show on the road throughout Canada and the U.S. There are also permanent Cirque du Soleil productions in Las Vegas and Walt Disney World.

Needless to say, organizing a Cirque road production is no easy feat.

With a cast of 90 traveling to a different city each week, significant capital and logistic strategy is a must.

Expenditures, in the form of salaries, as well as promotion and other budgetary items can add up quickly. Recouping the initial investment naturally depends on ticket and merchandise sales.

“Axel,” Cirque’s 48th original production recently made its way through Huntsville at the Von Braun Center. The show focuses on Axel, a young artist-musician finding his place in the world through his art and music. 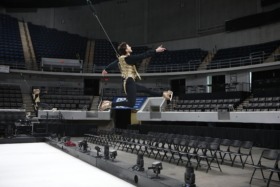 With songs seamlessly interwoven with an original score, “Axel” is a feast for the eyes and ears; ice-skating acrobatic expertise that combines technical skill with impeccable grace and agility. The lighting and real-time videography seductively draws the audience into Axel’s world of color and sound.

One reviewer likened it to “Ice Capades on steroids.”

After debuting in Cornwall, Ont., this month, “Axel” crossed the U.S. border into New York for a stop in Syracuse.

“ ‘Axel’ is just getting started,” said Casey Echols, regional publicist for Cirque du Soleil. “This (Huntsville) is the second stop in the US; the next stop will be Pensacola.”

For senior publicity manager Julie Desmarais, she is just getting started on her fourth tour.

“ ‘Axel’ is my fourth tour,” said Julie Desmarais, who has been working with Cirque for the past nine years. “We will be touring up to 40 cities; ‘Axel’ will be touring the U.S. for the next two years.”

And, production starts with the creation team; developing a concept and bringing it to life.

“There are many hours, many people involved,” said Desmarais. “There’s the producer, director of creation that puts together a team. That team includes the stage director, writer, music composer, video, lights, and sound crew. There are seven months of developing a story, sketching out the costumes, composing the music, casting, rehearsing 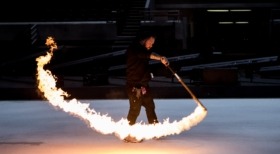 It takes a special touch to meld fire and ice and not yield water. (Photo/Steve Babin)

“A lot of training goes into it, during the staging and validation period, there’s eight hours of training daily. Each performer has their own schedule and routine. Staging and validation is where speed and heights are checked, validating cues that they’ll be performing. Training ends roughly three hours before the show begins, after everything has been validated.”

There’s also the logistics of traveling cross country with cast members and trucks filled with stage and sound equipment, and costumes. There are 90 people on the tour and the group represents 22 nationalities. There are 41 people in the performing cast, including five musicians and Axel who sings and plays guitar.

After 25 years working in London’s West End, Julia O’Brien has spent the past eight years as the head of wardrobe with Cirque du Soleil.

Although the costumes are made elsewhere, the team of four in wardrobe is responsible for repairing and maintaining the costumes, so they are fresh and ready to go for each performance. 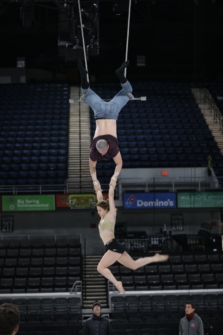 The costumes also have a unique feature.

“Each costume is fitted with a spotlight tracking system with two channels, one installed in each shoulder of the performer’s costume,” said O’Brien. “Somewhere above the ice, there’s an infrared light that ‘magically’ follows each skater. Skaters move so fast.

“It’s definitely easier to have the tracking system than having a human keeping up with the skaters.”

The plusses and minuses of the job are one and the same, according to O’Brien. She loves the travel, but it’s also physically demanding,

“We move every single week,” she said. “We have 16 trucks to load and unload. Working in different venues every week, there’s a different challenge.”

Some of those challenges included working in older facilities that haven’t been upgraded; or repurposed facilities that may not have been originally designed for large-scale performances.

“I’ve always wanted a job where I could combine traveling with working,” said Desmarais. “Cirque du Soleil is a company I’ve always wanted to work for. “The performers are passionate, very dedicated. It makes everything a lot more fun when you’re away from home.

“It’s not a myth to say my family is here; we are like family. With so many different cultures, it’s fun to learn from everybody.”

Huntsville Doubles Down on Leadership Role in Space at International Confer...