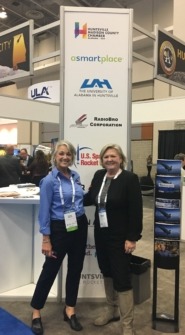 Marcia Lindstrom and Deborah Barnhart at the Huntsville booth. Lindstrom is strategic
communications officer for NASA’s Space Launch System at Marshall Space Flight Center, and Barnhart
is the CEO of the U.S. Space & Rocket Center.

WASHINGTON — Huntsville is living up to its moniker as the Rocket City at the 70th annual International Astronautical Congress this week in Washington, D.C.

Huntsville is the only community to participate among 170-plus corporate, state and national exhibitors. Last year’s IAC in Bremen, Germany saw a record 6,500 participants from 83 countries convene to collaborate on space research, development and utilization.

The Huntsville/Madison County Chamber is coordinating the Rocket City’s presence, which consists of Draper, RadioBro, RUAG Space USA, the North Alabama International Trade Association, the University of Alabama in Huntsville and the U.S. Space & Rocket Center. Our booth is strategically located across from NASA and adjacent to Aerojet Rocketdyne, Boeing, Dynetics and ULA, all prominent commercial players in the nation’s aerospace ecosystem, and all with a presence in Huntsville.

This week, visitors to the Rocket City booth have included:

“It makes sense that we’re the only community exhibiting at IAC because we have so much to offer across the civil, commercial and defense space industries,” said Lucia Cape, senior vice president of economic development for the Huntsville/Madison County Chamber. “With Marshall Space Flight Center, the Missile Defense Agency, the U.S. Army Space and Missile Defense Command and 400 aerospace and defense companies in the Huntsville metro, we are connected to nearly every U.S. space initiative in some way.” 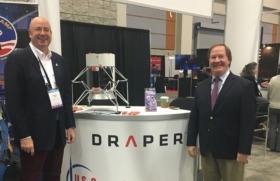 The City of Huntsville also has a presence at IAC to share some of the advantages our city offers to companies interested in locating here.

“Space is one of the main drivers of our economy. We’ve proven ourselves as a community time and time again whether it’s developing the rocket that put humans on the moon 50 years ago to the development of the rocket that will take us back and eventually to Mars,” said Huntsville Mayor Tommy Battle.  “We’ve also carved out an important leadership role in space for national security with the Army Space and Missile Defense Command headquarters here as well as the bulk of the Missile Defense Agency.

“Huntsville attending the IAC is a great place for us to continue building on our community’s expertise and recruiting more jobs and workers.”

This year, the IAC celebrates the 50th anniversary of the Apollo Moon landing, and the Chamber’s booth highlights the Apollo milestone, a fitting tribute to the Huntsville-based rocket programs that put man on the Moon and will return astronauts there in 2024.