It took more than a decade’s worth of sweat and tears for Scott McLain, but he’s finally able to harvest the fruits of his labor with Constellation.

The multi-use development will be breaking ground next month on an apartment complex and that’s just the first of several projects planned at the Clinton Avenue-South Memorial Parkway site.

“We’re off to the races,” McLain said. “We’ll be moving dirt for another month and then pour concrete for the apartments in early December.”

Constellation is at the intersection of South Memorial Parkway and Clinton Avenue. (Rendering/Constellation)

There will also be a 200,000 square-foot office tower that, McLain said, will “only be limited by physics and economics.”

McLain said he’s recruiting restaurants and retailers that will be new to Huntsville to help make Constellation a destination site.

McLain’s vision began in 2007 when the Heart of Huntsville shopping mall was razed and he had a concept of a multi-use development.

Blending retail with dining with hotels was not widely known at the time. The shopping mall with everything under one roof was slowly being phased out for the likes of “galleria-type” shopping centers.

Along the way, he found and lost investors in the project while coordinating challenging situations.

But, as in life, good things come to those who wait.

And a good thing is coming. 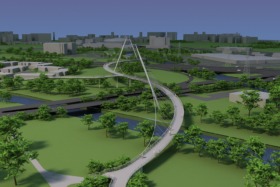 “It’s in part a public-private partnership that we’re happy to facilitate for our community,” McLain said.

McLain has a “committed team” that includes a Chicago investment company and $3 million from the city. The city’s investment includes access to parking and upgrades at the intersection.

At the confluence of I-565, Memorial Parkway and Clinton Avenue, the site has the largest traffic count in Huntsville and will, in essence, be the gateway to downtown Huntsville.

Or, in another vein, “the hood ornament to Downtown,” McLain said.

Another part of the “ornament” will be a planned elevated pedestrian bridge by the city. The plans call for it to span the Parkway and provide a connection for downtown, the Von Braun Center and the Lowe Mill area.

With Constellation, the stars are aligning to help a growing Huntsville meet the demands and the challenges of the future.

Welcome to Mars: VBC’s New Out of This World Music Hall
Scroll to top