The Leidos Live Technology Showcase rolled into Huntsville this week for a three-day interactive demonstration of the company’s wide-ranging technological capabilities. 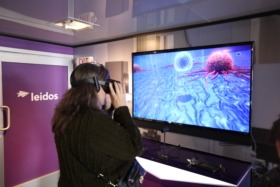 The exhibit arrived Tuesday at the University of Alabama-Huntsville and engineering students experienced Leidos’ IT and cybersecurity solutions.

The tour traveled to the new Leidos headquarters in Cummings Research Park on Wednesday where employees and guests were treated to ice cream and barbeque while touring the interactive exhibits.

On Thursday, it moved to Redstone Arsenal so Leidos customers could also enjoy the experience.

Angela Pounders, the Leidos business development field office manager in Huntsville, said there are some exciting things happening here in Huntsville for the company.

“We work across a broad spectrum and have a lot of business alliances in the areas of healthcare, space, civil intelligence, military, and humanitarian efforts,” Pounders said. “We have employees working in program offices on the Arsenal and we even have people in Anniston supporting FEMA. But one of things I am excited about is that we have the world’s largest supply chain in Antarctica.”

Each exhibit showcases each segment of that spectrum including a 3D virtual tour inside the body demonstrating Leidos’ work with peptides in cancer research.

One of the exhibits consist of augmented reality posters of employees who come to life and start talking to you. The second part of the presentation uses virtual reality goggles to provide a 360-degree virtual look at Leidos’ work in Antarctica. It takes you on a tour of the 100,000 square feet of facilities, some thousands of miles apart in areas that are so desolate, there are no cellphones, hospitals, restaurants or people, except for Leidos workers. Viewers also go under the ice with Antarctic ice swimmers. 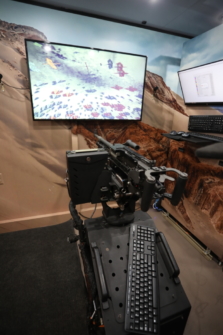 Visitors can sit in a simulator for firing machine guns utilizing Leidos software; and participate via big screen in sweeping for and destroying improvised explosive devices on the battlefield anywhere in the world.

Using microwave technology on the front of the vehicle, the exhibit puts you behind the tank or military vehicle so you can identify IEDs on the path ahead and detonate them safely.

A gigantic flat-screen table shows the operational capabilities of robotically designed unmanned surface vessels. Currently in the pilot phase, these USVs can carry a variety of Leidos humanitarian, research, or military sensor packages into treacherous waters and storms where it is too dangerous for the Navy.

“These vessels usually stay out for three months at a time and unlike drones that are controlled remotely by humans, these vessels have no interaction with any humans,” said Dennis Card, Leidos tour manager. “There is only one built right now and it went to Hawaii and back from San Diego. Another one, twice as large is being built and it will go out from Gulfport, Miss.”

One of the interactive demonstrations incorporates a Tetris-like virtualization game that brings the viewer into the conveyor system to store packages bound for the International Space Station.

“We run cargo mission contracts for NASA for all the cargo and resupply efforts going to the International Space Station,” said Suzzanna Martinez, Leidos director of strategic communications. “These resupply orders come from the astronauts and our system packs and stores the cargo for whatever different kind of vessel will be going up.” 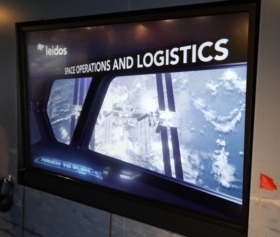 A Tetris-like virtualization game brings the viewer into the logistics system of the International Space Station. (Photo/Steve Babin)

In everyday life where no one really knows it, Leidos air traffic control software is used to pick up communications between air traffic towers, to scan luggage, and much more.

Leidos was started by Dr. J. Robert Beyster in 1969. An exact model of his original 1969 Chevrolet Malibu, painted in the famous Leidos purple, is also part of the traveling show and at the end of the tour, will be raffled off to a lucky Leidos employee.

The roadshow also travels with a purple ice cream truck.

“We call it the Leidos Scoop Ice Cream Truck and ice cream socials are a grassroots way of saying thank you to our customers on a nice hot day,” said Martinez. “We take it out to Federal Aviation Administration headquarters for National Aviation Day, and we have taken it to NASA headquarters in Washington, DC for National Space Day and people love it.”

The innovation showcase and its other components are all a part of the company’s 50th anniversary celebration.