The announcement didn’t come gradually or with the drama that accompanied the rollout of the top four teams participating in the college football playoff, but for the city’s civic leaders the news was just as exciting and filled with suspense for the future. 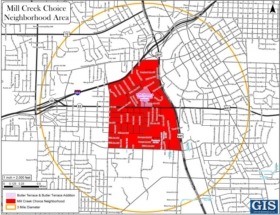 Huntsville is one of four cities nationwide to receive a Choice Neighborhood Planning grant. The Rocket City joined Rome, Ga.; Trenton, N.J.; and Omaha, Neb.; in receiving the award.

The cities were notified in September and Huntsville officials unveiled plans Thursday on how the $1.3 million grant will be used.

Erwin said the blueprints are designed to renovate “distressed public housing’’ and improve blight in a one-mile radius around Butler Terrace, which was built in the early 1950s. The area is from Bob Wallace and Memorial Parkway west to Triana Boulevard and I-565.

A packed house gathered at First Baptist Church to hear details of the renovations, which are a joint venture between the City of Huntsville and the Housing Authority. Council President Devyn Keith and Councilmembers Frances Akridge, Will Culver and Jennie Robinson, along with Urban and Long Range Planning Manager Dennis Madsen, Real Estate Development for the Housing Authority Quisha Riche and Camiros Planning Coordinator Bill James attended the meeting.

Camiros is a Chicago-based company with experience in planning, zoning, urban design, economic development and landscape architecture. The firm has worked with Choice Neighborhood Planning grant cities, including Mobile.

“Today was about introducing Camiros as partners,’’ Erwin said.

He said community members and not just city authorities will have a voice in the planning of renovations and upgrades.

Residents in areas affected by new construction, he said, won’t be dislocated immediately since the project is only in the planning process. However, residents may have to eventually move for a period of time.

If that happens, Erwin said, the city will relocate residents temporarily and those who were moved will have first options on returning to their community once renovations are complete.

The Choice Neighborhood Planning grant lasts for three years. Once planning goals are met, Huntsville can compete for a $30 million U.S. Department of Housing and Urban Development grant to complete construction.

Erwin said residents in areas including Butler Terrace, Lowe Mill and Terry Heights and Campus 805 are welcomed to voice their opinions.

The Choice Neighborhoods Initiative is a program of HUD. Its goal is to transform neighborhoods of extreme poverty into functioning, sustainable mixed-income communities.

New MidCity Theater to Have Largest Screen in Alabama

Dynetics acquired by Leidos for $1.65B
Scroll to top