During the past two decades, not only has the Huntsville-Madison County area outgrown its own infrastructure, the call center has been bursting at the seams. 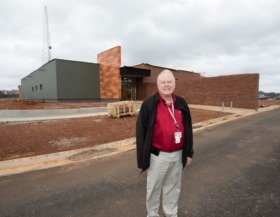 A key advantage is seamless efficiency in communication and response. And Huntsville-Madison County 911 was one of the first agencies to embrace this multi-agency model.

To this end, the new 911 Call Center will be twice the size of the original.

Complete with larger conference and training rooms, all with state-of-the-art technology. A dedicated IT lab that has raised tables and lab benches.

There’s a ton of rebar and lots of concrete in the mix, too. The main call center area is built underground with steel reinforced concrete and will be able to withstand an F5 tornado.

“It’s been ‘a minute’ since the groundbreaking on that freezing day in December 2017. Sometime in mid-spring the dream will become reality. We’re looking at April or May 2020, May being the latest timeframe,” said Ernie Blair, CEO of the center. “Then, we’ll need three months to move, once we get certificate of occupancy.

“We’re using this opportunity to upgrade our technology. Technology is changing so fast; we’re running to catch up. The ways that people communicate has changed – 85 percent of 911 calls are now made by cell phone.” 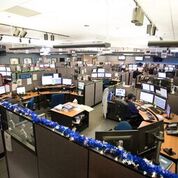 The new 911 Center will have larger conference and training rooms and a dedicated IT lab. (Photo/Steve Babin)

The area’s explosive growth and development has impacted the center’s completion timeline.

“We’re still under budget and were ahead of schedule until three to four months ago,” said Blair. “All the resources are stretched; general contractors are having a hard time keeping the subs on the jobs.”

As far a deadline for being out of the existing facility, there isn’t one.

“We don’t have a deadline,” said Blair. “There are two groups looking to buy the old building: the City of Huntsville and Huntsville Utilities. The latest I’ve heard is that they’re working together.”

Blair, though, has confidence in the center and the personnel.

“Nobody does 911 better than we do. We are the largest center in the state and one of the few combined centers,” said Blair. “We’re important to the quality of life and public safety, everyone is saving a life every day.

“It’s the coolest job anyone could have.”

Mario’s Five Points: A New Face in a Familiar Place with the Same Attitud...