Two more office buildings are on the rise at Redstone Gateway as government contractors warm to the office park’s amenity-rich environment and proximity to both Redstone Arsenal and Cummings Research Park. 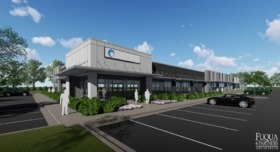 Rendering shows the 42,000 square-foot office building under construction at Redstone Gateway. It is expected to open by the end of the year.

Corporate Office Properties Trust, in partnership with Jim Wilson & Associates, developed the 4.6 million square-foot, mixed-use development as a Class-A office park near Gate 9 at I-565 and Redstone Road.

“The growth of availability at Redstone Gateway continues to be an asset to government contractors locating close to their customer base on Redstone Arsenal,” said COPT Chief Operating Officer Paul Adkins. “This pre-lease, along with other recent leases, highlights the value proposition of Redstone Gateway.”

Currently, there are seven buildings under construction at Redstone Gateway, expected to add another 662,000 square feet to the development.

One of those buildings is a 100,000 square foot, four-story office building along Rideout Road. There will be 113,000 square-feet of office leasing space available upon completion end of the year.

It, too, should be complete by the end of 2020 but will just keep pace with the demand as it is already 75 percent pre-leased to a government contractor. Approximately 13,000 square feet will be available for lease upon completion. 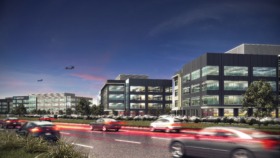 Rendering shows 100,000 square-foot office building with construction expected to be complete by the end of the year.

“We’re excited to continue this phase of development and are thankful for the support from the whole community in North Alabama.”

COPT, whose Huntsville office is at Bridge Street Town Centre, specializes in developing and operating office buildings in locations that support the U.S. government and its defense contractors.