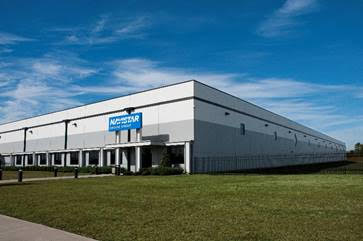 The shovels dug deeply into wet but fertile ground as Navistar officially broke ground this week on a 50-acre, $125 million expansion of its manufacturing facilities in the Jetplex Industrial Park in Huntsville.

The build-out will drive Navistar’s total Huntsville footprint to 80 acres and add 110,000 square feet to its 300,000 square-foot plant. It will also add 145 skilled manufacturing jobs to build next-generation, big-bore powertrains.

“Over the past two decades, the city of Huntsville has been a valuable partner and we are eager to expand our presence here,” said Persio Lisboa, executive vice president and chief operating officer, Navistar. “The local skilled workforce has proudly supported the implementation of our product strategy, and we look forward to incorporating some of the most advanced manufacturing standards into our Navistar Diesel of Alabama facility to continue to bring best-in-class products to the market.”

“Our skilled manufacturing workforce is ready to take on the production of Navistar’s global powertrain, adding capacity to Huntsville’s reputation as the ‘propulsion capital’ of the world,” he said. “Whether it’s across the country or across the universe, Huntsville gets you there.”

Already using the latest state-of-the-art technology, the company will implement a “manufacturing 4.0 strategy” in the plant.

Next-level software and assembly lines will drive everything from receiving components to delivery to the customers, revving up production while giving them more control over that production. 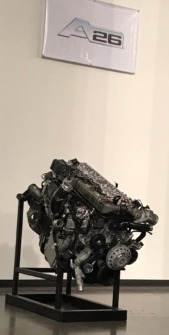 Navistar’s A26 engine is built in Huntsville. (Photo/Kimberly Ballard)

Navistar’s principal engine built in Huntsville is the International A26 – a 12.4-liter big-bore engine. The current 300,000 square feet of manufacturing space is dedicated to the A26 engine.

Navistar will use the additional space to produce next-generation big-bore powertrains developed with its global alliance partner Traton.

According to Brandon Tucker, Director of Operations, Navistar has built more than 1 million engines in Huntsville over the past 20 years.

“Engines are what makes us great, it’s what gives us the competitive advantage … so this is really about a big job, well done.”

Tucker said it is also about business continuation.

“It’s a line in the sand, a jumping off point for big things to come,” he said. “Like any industry, we ride the tide of ebb and flow … but today it is time to focus on the future.”

He said things will move quickly on the new building with center office construction starting in March, site work and grading should begin by spring with core construction expected to start by midsummer. It is slated for completion the first half of 2023.

“Jetplex Industrial Park at Huntsville International Airport is proud to be home to Navistar,” said Rick Tucker, CEO of the Port of Huntsville. “Having been a corporate partner of theirs for over two decades, it means a lot to us that they would desire to continue to grow both the facility and their relationship with us.

“I’m certain that we will all work together to continue to propel Alabama forward.”

Father and Son Team Celebrate 40 Years With the Golden Arches in North Alab...
Scroll to top