U.S. Sen. Doug Jones (D-AL) recently sat down with the Huntsville Business Journal and discussed several issues important to our state and nation.  This is the first installment of five reports from the interview. Today’s topic is Workforce Development.

As a strong proponent of workforce development initiatives, Sen. Doug Jones introduced the Working On Rewarding and Keeping Employees Resilient (WORKER) and the Investing in Tomorrow’s Workforce Acts. 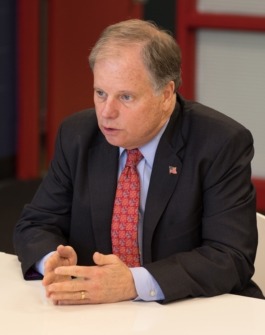 Sen. Jones: “… some jobs are going to be eliminated, but it will also give us opportunities.” (Photo/Steve Babin)

The legislation was designed to increase federal investments in workforce development and training to help prepare workers for the jobs of the future and to promote education and training for workers in high-demand industries, along with the expansion of registered apprentice programs.

The WORKER Act would:

The Investing in Tomorrow’s Workforce Act would:

These two key pieces of legislation were developed to help ensure that employees throughout Alabama and the nation are prepared for and have access to well-paid skilled jobs and have the skills that they need to successfully navigate the transition that will result from advances in automation and technology.

HBJ: Can you tell us about the Tomorrow’s Workforce and WORKER acts? 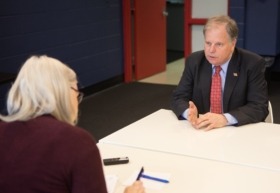 Sen. Jones: “… if we want to continue to attract industry to this state, we’re going to need a trained workforce.” (Photo/Steve Babin)

Jones: There are a lot of things that we’re doing that reflect what I believe, are meeting some of the more pressing needs in Alabama. We’ve got low unemployment, which is great; but, at the same time, if we want to continue to attract industry to this state, we’re going to need a trained workforce.

We’re also seeing that automation is going to continue at the pace – if not a quicker pace, than we’ve seen. That’s going to mean that some jobs are going to be eliminated, but it will also give us opportunities.

The work that we’re doing with both career-technical advances as well as the Tomorrow’s Workforce and WORKER bills are going to do things to plan for that: to get people trained, to see what niches can be filled with workforce development, whether that’s through a four-year college, a two-year college, or some type of apprenticeship or certification program.

That’s the gist of what those bills are going to be doing. To make sure that we’ve got the 21st century workforce for the companies that will be coming as automation takes over.

HBJ: What about dislocated workers?

We’re moving in a way to help make sure that our infrastructure and our jobs save this planet. That’s going to transition away from some things into new forms of energy.

There are a lot of opportunities there, but you’ve got to be able to transition. You can’t just flip a switch and cut off fossil fuels. What we’re seeing is that more and more companies are now coming to the table to talk about that.

We’ve got issues down in Gadsden right now, where a number of workers are going to be laid off from the Goodyear plant, which is likely to close. We need to get them over to Gadsden State or some other places to let them learn new skills and new trades because they’re still of working age.

Some of those workers will be displaced workers in the sense that their jobs may get phased out. They are still employable; they have families and they’re going to want to work.

We’ve got to do the training and education that will help with that. Our two-year college system is primed to do that.”

(Tomorrow: Sen. Jones discusses the state of health care and efforts to help improve it)