The first building constructed by Robins & Morton was a Shell gas station in 1946. 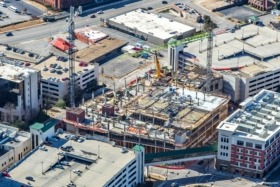 “We’ve grown quite a bit since then, obviously,’’ said Mitch Coley, operations manager for the Huntsville office.

Robins & Morton is no stranger to the Rocket City. The firm began a relationship with Huntsville Hospital 31 years ago, and Coley said that partnership is “the backbone’’ of its business in the city.

Two towering cranes just off Gallatin Street are part of the construction for Huntsville Hospital’s seven-story, 382,000 square-foot Orthopedic & Spine Tower. It’s expected to be completed in 2021.

But while hospital construction is Robins & Morton’s calling card, Coley said diversity, particularly in Huntsville, is part of its footprint.

Next to the hospital tower, the finishing touches are being put on Redstone Federal Credit Union’s five-story, Class-A office building with an adjoining four-story parking deck.

“The exterior of the office building is close to complete and it’s a very striking structure,’’ Coley said. “That project will wrap up at the end of this year.”

“As you can see from the cranes rising above downtown,’’ Coley said, “We have three major projects transforming the Huntsville skyline.”

Robins & Morton is working with Redstone Gateway and Sanmina, and counts Times Plaza on South Memorial Parkway among its projects.

Other local Robins & Morton projects are:

The company’s projects around the state include the Auburn Arena, the Auburn University Recreation and Wellness Center, Regions Field and the Embassy Suites hotel in Tuscaloosa.

Robins & Morton opened a full-service office in Huntsville in 2007 to further take advantage of the city’s exploding growth.

“We knew the best way to serve the business community was to become an ongoing part of the community,’’ Coley said. “And that’s worked well for us. We have more than 223 projects valued at $1.3 billion completed or in progress throughout Huntsville and the surrounding area.

“Even more important to us: 80 percent of that work is from repeat clients.” 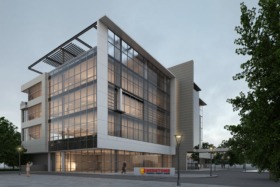 Another company strength is that Robins & Morton, which employs around 170 salaried employees and craft workers, uses its own workforce.

“We self-employee a lot of the work,’’ Coley said. “For instance, the concrete structure (on the tower), we’re doing that with our own men, our own forces. The reason we do that is it helps with cost, schedules, and quality.’’

Robins & Morton’s economic impact in the Tennessee Valley is substantial. The company reports it is responsible for more than 800,000-square feet of new construction with a projected construction value in excess of $225 million; is working with more than 150 trade partners; and expects to create between 800 and 900 full-time equivalent jobs throughout construction.

While Robins & Morton is involved throughout North Alabama, its local presence has been seen and felt mostly in Huntsville’s downtown and hospital district, both of which have undergone a facelift.

A Notasulga native, Coley met his wife Elaine while both were students at Auburn. They have two sons, Miles (6) and Cameron (4).

When he moved here 13 years ago, Coley said he remembers walking downtown on a weekend and finding a “ghost town.’’

“Now, you go down there and there are food truck rallies, laser light shows, people everywhere,’’ he said. “It’s really neat to see.

“We’re glad to be part of that growth.’’

In late spring or summer, Robins & Morton will announce plans for another downtown project.

“We want people to know that we’re not here just for the duration of a project,’’ Coley said. “We’re an established part of the Huntsville business community, and we look forward to continuing to be part of the region’s growth and economic development.

“We’ll continue the strong relationships we’ve maintained over the past 31 years while building new ones.”

The “Power of the Purse” Big Reveal: A Glimpse of Glamour before the Girls,...