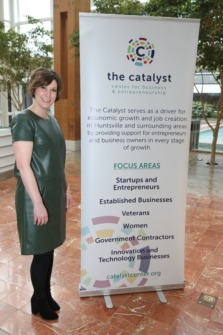 Sonia Robinson: “The most selfless decision you can make is to put yourself first. Try it. It will change you.” (Photo/Steve Babin)

This particular event was no exception as Sonia Robinson, a breast cancer survivor and the executive director at BIO Alabama, spoke to a sold-out, standing-room-only crowd.

“I do not miss a chance to talk about my boobs,” she said.

In 2017, Robinson was at the peak of her high-intensity career: 36 years old, divorced and raising two boys, then 4 and 8. To Robinson, going for her routine gynecological exam was just that, routine; another self-care box to check off between meetings and an otherwise busy workday.

As the nurse did the manual breast exam, she suggested that Robinson get a baseline mammogram.

Robinson initially declined, thinking to herself, “My career was on fire. I was 36 years old and never had had a baseline mammogram. I don’t have time; I’ll do it when I’m 40. Had I waited until I was 40, my story would have been very very different.”

The nurse practitioner felt a palpable lump in Robinson’s breast and asked her, “Have you ever felt this?”

For Robinson, monthly self-exams were not on her radar, so the answer was “no.”

Even after the nurse practitioner sent her for a diagnostic mammogram, Robinson saw it as another item to check off the to-do list. She assumed that the lump would be benign and she would be back to work without skipping a beat.

When the mammogram was complete, the technician told Robinson the radiologist wanted to speak with her on her way out.

“I thought my radiologist just had really good bedside manner and stopped to chat with all the patients afterwards; she’s good, but not THAT good,” said Robinson.

The radiologist told Robinson, “It looks suspicious. I’ve already spoken with your gynecologist.”

The next step was a surgical biopsy. When her surgeon called Robinson to discuss the results, he said the words she never expected to hear: “Sonia, we have a little cancer.”

As she processed the news and discussed the treatment options, Robinson slowly walked to her bedroom and lay down on the bed.

Sensing the news was bad, her mother lay down beside her as the conversation with the surgeon continued.

The cancer was likely Stage 1. A double mastectomy or a lumpectomy with radiation would be the options given.

Before making a decision, Robinson wanted a better understanding of what she was dealing with. Her surgeon gave her four weeks to research, gathering as much information she could. 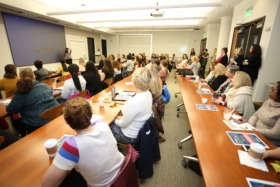 “What does life look like on the other side of this?” Robinson wanted to know.

Robinson opted for a double mastectomy. During surgery, it was discovered the cancer had spread to one of the lymph nodes, which immediately put her into Stage 2, which became a game-changer.

When the oncologist told Robinson that chemotherapy was to be scheduled, “I told him, “No,” said Robinson.

She advised the audience, “We are to question; we are to ask, to research. Y’all have to fight for your health.”

Robinson still believed that everything would be ok without chemotherapy.

“I felt that maybe I should have Dr. Harriman just ‘clear the margin’ and I do nothing, no chemo,” said Robinson. “As the words left my mouth, I thought how irresponsible that was.

“I had an 8-year-old and a 4-year-old. I wanted to be their mommy for a long time. When you’re given a diagnosis like this, it’s not just you, it’s we.”

After four weeks of research and consulting the medical community and breast cancer survivors, “I was told, ‘Sonia, you’re in a gray area’,” said Robinson. “You have to be happy with the decision that you make. Ultimately, I made the decision to move forward with chemo.”

Once the decision was made, Robinson threw a “Shave Party,” inviting forty of her closest friends and family members. The event included a champagne toast and a bouncy house for the kids.

After her head was shaved, she reveled in the new look.

“Try it, shave your head,” said Robinson. “It changed my life.”

Then, there were reconstruction decisions, such whether to keep one’s nipples or get tattoos. Robinson decided to keep hers. “Nipple tattoos, it’s a real thing, y’all,” said Robinson. “I want y’all to look at these,” as she sent images to friends, male and female, to get honest feedback. “Our boobs are so important to us as women,” said Robinson. “I really needed that feedback. I was 36 years old and single.

“Had I been older, I may not have made the same decision.”

Robinson’s fourth and final round of chemo came just 6 days after her 37th birthday. That came with the expectation that life would return to what it was, pre-cancer.

“Chemo is over, Sonia is well,” said Robinson. “That’s when the real work started.