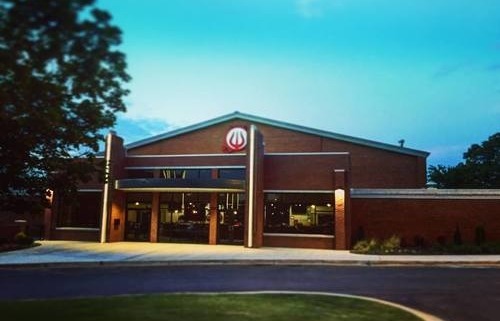 (Sitdown with Success is a regular feature of the Huntsville Business Journal on entrepreneurs and their keys to success. This month’s subject is Bruce Weddendorf who helped revolutionize the craft-brewing industry in Huntsville and the state.) 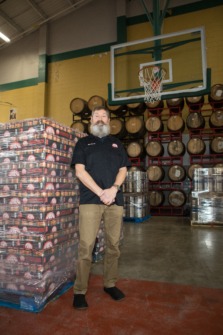 Bruce Weddendorf stands in the Straight to Ale stockroom, a converted gym at the former Stone Middle School. (Photo/Steve Babin)

The Valentine’s Day proclamation came on the heels of a recent accolade from RateBeer, naming the Huntsville brewery the “2019 Best Brewer in Alabama.” And what an honor it was: Five times in six years, Straight to Ale has earned the title.

Going far beyond its local and state popularity, Straight to Ale has become a nationally recognized product, as well as a hang out. The taproom is a prime destination location for out-of-town visitors.

It’s that kind of comfy place where old friends gather over a pint, business folk network and new connections are forged.

Getting its start in 2009, Straight to Ale has come a long way from its humble beginnings in the small, 500-square-foot production facility at Lincoln Mill.

In spring 2011, Straight To Ale took up residence in the former Olde Towne Brewery on Leeman Ferry Road. Still operating as a production venture, the passing of the Brewery Modernization Act in fall 2011 that included taprooms, was a business model game-changer.

Once the taproom was added, operations expanded to host a wide assortment of special events. Every night was a party of some sort and, by 2014, Straight to Ale was bursting at the seams.

School’s out forever! By summer 2016, Straight to Ale became the anchor tenant at Campus No. 805, formerly  Stone Middle School, which was a part of the West Huntsville redevelopment initiative.

In its spacious, 45,000-square-foot facility, Straight to Ale has plenty to offer. There’s the taproom with more than 20 taps of Straight To Ale brews. The beer names are uniquely memorable, such as “Monkeynaut,” and “Unobtainium.” STA Operations Manager Matt Broadhurst creates the quirky label art that’s poster worthy and unforgettable.

Having a reception, business meeting or a party? There are five special event rental spaces. There’s also a small retail shop that sells STA merchandise.

For dining, there’s Ale’s Kitchen, serving up items from a variety of cultures, all made from scratch.

Bruce Weddendorf, his wife Jo, and business partners Dan Perry and Colin Austin were the trailblazers on this first wave of local craft beer; frontrunners with the taproom concept.

The idea behind Straight to Ale was to make Huntsville more fun! “We wanted to provide a product that was uniquely Huntsville,” said Weddendorf. “To get people -all kinds of people- together over beer.”

Before 2009, there wasn’t a craft beer segment to the beer market. Free the Hops paved the way by helping to pass the Gourmet Beer Bill. That was the first industry game-changer. When they helped to pass the taproom laws two years later, it completely changed Straight to Ale’s business model.

“The thing is, we really didn’t know what it would do, we didn’t understand at the time how big a part of our lives it was going to become because we were still very much a manufacturing business,” said Weddendorf. “It (the taproom) made it so much better, so much easier to reach customers and to make bonds with those customers.”

Since 2011, Alabama has gone from seven craft breweries to 45 in 2019. The passing of the Gourmet Beer Bill and Taproom law had the one-two punch effect of creating a new industry and adapting the brewery business model from strictly production to a business that encompassed hospitality and retail, too. 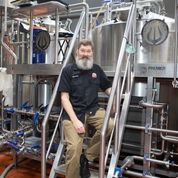 Straight to Ale’s Bruce Weddendorf is climbing the ladder to success in the craft beer industry. (Photo/Steve Babin)

“We grew from being just manufacturing-oriented to becoming part of the hospitality industry,” said Weddendorf. “That wasn’t something we planned, but it’s been tremendously beneficial to our business and beneficial to Huntsville.”

There remains to be challenges; but challenges are something that Weddendorf sees as something to go over, go under, go around, or break the walls down. Until the recent pandemic, home alcohol delivery wasn’t an issue nor was it on the radar.

“It was something that we hadn’t noticed until COVID-19,” said Weddendorf.

Despite the current business climate and the obstacles associated with COVID 19, Straight to Ale recently completed a merger with the Tuscaloosa-based Druid City Brewing. The idea was to help Druid City bring their great beers statewide to and to expand their fun, yet tiny taproom and brewery.

And it’s been a win-win.

“This has been a great relationship and it benefited everyone,” said Weddendorf. “We are very glad that we were fortunate enough to be able to make this deal.”

Straight to Ale provides the place and the experience where people can come to relax.

“It’s all kinds of people and everyone has the beer in common; the beer and the desire to be with other people,” said Weddendorf. “It’s amazing to touch the friendships, the business relationships, and all kinds of important connections and networking that come out of this place. And that is very satisfying to see; that type of success where we’re really influencing a lot of people’s lives, we’re making their lives better.

“We’re giving them somewhere to connect with other people and it’s beneficial to the community, so I’m really proud of that.”