Downtown Huntsville continues to grow, not just upward, as all of the cranes creating the skyline would suggest, but outward as well. 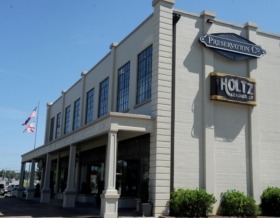 Preservation Company opened next door to Holtz Leather in 2017 and is called “Huntsville’s home for historic architecture.” (Photo/Eric Schultz)

One evolving area of growth is north of the city’s center down Meridian Street, where entrenched tenants Brooks & Collier are getting some new business neighbors down the street from its location near Pratt Avenue and the I-565 interchange.

Holtz Leather Company and Preservation Company are in the old Lincoln Mill Commissary. L’Etoile, a French bakery, is a recent move-in and is taking online orders as it prepares for a fall grand opening.

Meanwhile, Greg Brooks of the longtime family-owned Brooks and Collier said the new establishments, and rumors that many more changes to improve the area are in the works, have already attracted new customers.

“I can tell a lot of the younger crowd, I guess millennials is better, right, are coming in,’’ said Brooks, whose grandfather T.E. Brooks and partner Ernest Collier founded the store as a Feed and Seed in downtown Huntsville in 1946.

“That’s a good sign. Half the people who come in now we don’t even know and I’m used to everybody coming in we would know.’’

Brooks and Collier, which has evolved from selling products to farmers to a cosmopolitan shop carrying a variety of items from patio and indoor furniture and hardscapes to grills, has purchased property across the street from its location for a to-be-determined development.

Meanwhile, Holtz Leather Company moved into a multilevel store at Lincoln Mill four years ago where the production facility is on-site. The company was founded by childhood friends and the now-married team of Rick and Coleen Holtz.

“We’ve been primarily e-commerce before opening this retail store and still probably 90 percent of our sales come from online,’’ said Becka Christian, the company’s vice president. “But we’ve been really, really impressed with how the retail store has done.

“When we first opened we honestly thought, ‘If it just pays the rent that would be awesome. That’s all we need.’ It’s far exceeded that, which has been really exciting.’’

Preservation Company opened next door to Holtz Leather in 2017 by owners Jason and Christa Butler. Crunkleton describes it as, “Huntsville’s home for historic architecture,’’ and offers “unusually uncommon inventory that blends old and new design.design.’’

In keeping with the family vibe of Meridian Street, former Army officer Kevin Zurmuehlan and his wife Kristen moved in at Lincoln Mill and have a storefront grand opening for L’Etoile planned for October.

“We’re really excited about that,’’ Christian said. “They did a test taste and it was very good.’’

While Brooks wouldn’t reveal details that were discussed at a recent meeting with city planners,, he say add they should inject even more vibrance into the area. However, things have already been on the upswing despite the pandemic.

“I hate to say it,’’ he said, “but it’s the best year we’ve ever had. I think it’s part of the staying at home thing. People are working in the yard and the patio, grilling out a lot. We’ve been out of charcoal for close to a month.

“That’s part of the people hanging out and not going to a restaurant.’’

Who knows what continued improvements could bring to the current and future stores along Meridian Street in one of the oldest neighborhoods in town?