There has been very little, if any, slowdown in commercial building in Huntsville and Madison throughout the COVID-19 pandemic.

While the weight of uncertainty related to the pandemic has not disappeared, commercial builders and developers continue to work through it like Marshall Space Flight Center engineers work through the challenges of the space program – always moving positively forward; always working the problem from a pragmatic standpoint; and never accepting failure as a final outcome.

According to Shane Davis, Director of Urban & Economic Development for the City of Huntsville, new construction permits, and permit inspection requests have not declined throughout the pandemic and the City continues to see strong growth in all building sectors.

“In terms of the overall environment, we continue to see multiple new projects looking at the Huntsville market as a new or expanding location,” said Davis. “While COVID has slowed the number of potential new companies and their projects, active projects are very strong and diverse in varying business sectors.

“Ongoing construction activities have been hindered by reduced workers, intermediate quarantining, and delays due to the availability in building materials. But while these conditions have slowed the overall construction pace, all ongoing commercial and industrial projects continue to move ahead with a shift in completion deadlines and openings.”

He points to the very visible and very active downtown construction happening on what seems like every block.

“City Centre is under construction with Phase II – lofts, retail, and a parking garage,” he said. “Two new public parking garages are going up at Greene and Monroe streets. Both the Curio Hotel and Hampton Inn and Suites are in the midst of construction, and the new Huntsville Hospital Tower is taking shape.

Last year, Russ Russell Commercial Real Estate set a land sales record for downtown Huntsville at $56 per square foot for the Hampton Inn and Suites project. Located on the corner of Clinton Avenue and Monroe Street, the land is prime downtown real estate across from the expanded Von Braun Center.

“It is one of the few corners that has been vacant with no building on it,” Russell said. “Out-of-town developers look at these parcels of land with fresh eyes are willing to pay a premium because they can see it developed, where sometimes local people can’t because they drive past it every day.

“I set up an ugly tent with cold beer and rare velvet Elvis artwork, and you will be surprised how it brings that vision into full view,” he said.

Mitch Coley, division Manager at Robins & Morton, said they are working on a variety of projects in the greater Huntsville area. Some of the most visible include Huntsville Hospital’s Orthopedic and Spine Tower, Redstone Federal Credit Union, 106 Jefferson, Pelham Street Park and Redstone Gateway 7100 and 8100’s new office building. 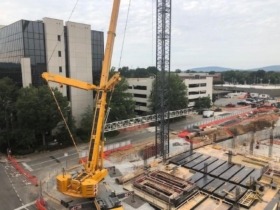 “Mid-year there was a decline in new projects and delays in projects in the planning stages as owners and developers hesitated, wanting a clearer picture of what was ahead,” said Coley. “But the industry is seeing some of these projects resuming. The good news is that those projects haven’t gone away and that’s providing strong start for next year.”

He said they are seeing a decrease in the number of new projects reported as upcoming opportunities from architect and design firms, but they believe this will manifest itself in a market-by-market and city-by-city basis. Huntsville is not likely to be as affected by what would ordinarily predict a nationwide downturn because Huntsville’s market sector is so diverse.

“Looking back at the recession of 2008, the construction industry contracted,” Coley said. “It was different from what we’re facing today because of the lack of capital during the Great Recession, but it resulted in a pent-up demand for construction.

“There was still a backlog when COVID-19 surfaced. Although some clients expressed hesitancy to proceed with projects in the very early stages of planning mid-year, we’ve seen many of them resume.”

Russell sees positive signs everywhere. From the construction of the $40 million Autograph Collection by Marriott hotel being built to replace the southern portion of the Von Braun Center parking deck; to the long-awaited downtown Constellation development, which begins Phase I construction this fall.

In addition to these large-scale projects, downtown continues to see new businesses opening up and the redevelopment of existing spaces in the core, Davis said.

“The biggest impact on new commercial projects and hospitality projects has been the pause in project financing,” Davis said. “We have dozens of projects that still have approval from both the private equity and brand/retailer sides. However, COVID-19 has caused a pause in the start of construction due to the ability to close on the financial package.

“The ability for these projects to keep the private equity and national brand approvals shows the current strength of the Huntsville market.”

“The banks are lending money and it is cheap,” said Beck, whose company specializes in retail developments. “Bankers know the Huntsville market is good because its employment base is there with federal dollars coming from Redstone Arsenal and subcontracting coming from Cummings Research Park. With the jobs there, the banks are a yes for lending.”

On the other hand, many banks are showing hesitancy toward some restaurants and hotels.

According to Joey Ceci, president of the Breland Companies, “We have several cases where regional hotel and restaurant owners are ready to move forward but in those two industries, it is almost impossible to get financing, despite their financial statements looking fine. Accessing capital is very important to companies that are expanding so this has been a deterrent.” 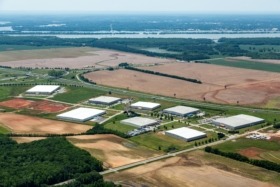 Outside of downtown, Davis points to growth and the success of other commercial projects throughout the region.

SouthPoint Business Park, off Interstates 65 and 565 and five miles from the Mazda Toyota Manufacturing plant, broke ground on its 11th facility at the 1.9 million square-foot industrial park that is already home to six companies. The new building is the region’s largest spec industrial facility and, according to Davis, it is almost full.

SouthPoint is a component of the larger regional economic strategy, and Davis calls out regional leaders and partners for that expansion, as they continue to focus on the bigger picture and work to be successful in those areas.

“Cummings Research Park remains the location of choice for big business,” Davis said. “Several entities have plans for expansion and the city continues to invest in new and updated infrastructure as part of implementing the updated Master Plan. Even with the COVID events, projects are in the works for 2021 and we believe will be a big year for CRP.”

At MidCity, construction slowed due to COVID, but retail, hospitality, and the initial multi-family components are still on schedule to start construction this fall.

“Most of the infrastructure construction, site grading, and utility relocations are wrapping up such that the redevelopment plan can go vertical,” said Davis. “We believe 2021 will be an exciting year for MidCity as the building architecture that has been shared through the Master Plan will come to life.”

One of the worst kept secrets in Madison County is all that red clay moving around at the corner of Town Madison Boulevard and Zierdt Road.

The newest Huntsville Starbucks location and Outback Steakhouse are moving forward, while Town Madison continues to build a retail center across the street from Toyota Field. The buildings are 50 percent complete and will welcome a chef-driven Italian restaurant to its tenant line-up.

“Economic development continues to be a primary focus for our Madison team,” said Madison Mayor Paul Finley. “Our YTD sales tax is up over 10 percent from last year despite the COVID-19 situation, and we continue to see success in growing our retail sales tax base.

“Retail follows rooftops,” said Beck of TSCG. “The good news is that Huntsville is still growing; we still have a housing shortage; we still have over 10,000 jobs coming into the area; and there is still a lot of demand, even pent-up retail demand.”

Beck, who has developed retail projects throughout the region, said he is positive about the future as he sees developers moving towards mixed-use projects with a housing component and perhaps an office of medical office component fitted together with traditional retail.

“We are still seeing expansion downtown and on the south part of town with the Hays Farm development,” he said. “Scottsboro, Athens and northern Madison County, Hazel Green and Meridianville are showing continuous growth.

“Athens, for instance, is getting a second Publix where the old Kmart used to be. With its proximity to the interstate and Toyota Mazda, Athens is a great commuting city for Huntsville and Madison, and it should soon see a boom as it grows together with Madison.”

He also said smaller towns such as Hartselle and Priceville are seeing growth as well because the commute time to Huntsville or Madison is workable.

“If you moved here from Atlanta or (Washington) D.C., you have an entirely different perspective on commutes,” he said. “And it is less expensive to live in those smaller towns.”

The disconnect he said is with forced reduced sales volumes. Can retailers justify the construction costs and afford the rent?

“We don’t know the answer to that yet, but at some point, business must open back up and people have to get back work,” Beck said. “There’s no way these restaurants with construction costs being where they are, can at 50 percent capacity and a limit on the hours you can sell alcohol, justify new construction costs.”

He said while rent must go down, at the same time, landlords have mortgages and they have to make mortgage payments. The good part is that developers and landlords are being creative in finding ways to make it work.

“On pre-COVID leases, landlords are working on rent deferrals or rent reductions where the tenant pays partial rent for the time being, and when things get back to normal, going back to full rent and perhaps adding a longer lease time, like an extra year on the lease.

“As long as there’s housing demand, retail will be all right, but we also don’t yet know how the Amazon effect will affect big box retail,” he said. “There are still a lot of people who want to shop in stores. Shopping is a social event just like going out to play golf or tennis. But throughout this pandemic, Amazon has filled that space and we don’t know yet how much that convenience will carry over into everyday life once things get back to normal.”

Coley too said there is still a lot of uncertainty, but his company Robins & Morton believes most people are hopeful that we will gain control over the pandemic in the not-too-distant future.

“When you think that it can be two years or more from planning to completion for a project, you can understand why a lot of active construction hasn’t slowed down,” said Coley. “You’re always building for the future, and I think that’s what we’re seeing here in Huntsville.”

Sit Down with Success: Restaurateur Stephanie Kennedy-Mell
Scroll to top