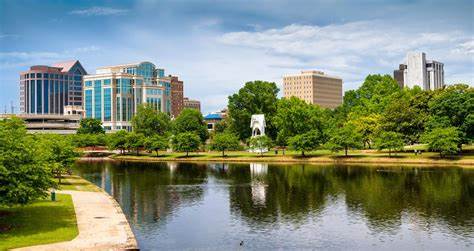 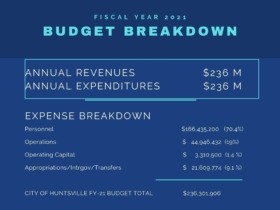 The budget represents the continuing commitment of city government to provide quality services and investments to a growing community while meeting the challenges of current economic events.

“We’ve taken a cautious, conservative approach to next year’s spending while still keeping up with growth and demand for services,” said Battle. “I am grateful to our department heads for their ability to keep this city moving forward while keeping a watchful eye on every penny spent.”

The general fund represents an $8.1 million increase over FY-20 and provides basic level funding for municipal departments. The bulk of any increase supports personnel needs to accommodate growth and staffing at new facilities. Support to the Huntsville City School system remains fully funded and capital projects will proceed as planned.

Finance Director Penny Smith said she is cautiously optimistic about revenue in the coming year. The city is still growing, housing sales are up, and the income base remains steady thanks to Redstone Arsenal, numerous large corporate employers, growth in the construction market and the abundance of new jobs being filled in the community.

“Sales and use taxes are holding steady, but we recognize we will still have COVID impacts and we’ve taken that into consideration,” said Smith. “Revenues from the hospitality sector and some retail are expected to remain down and the budget reflects those projections.”

Half of the FY-20 Fiscal Year was under the pandemic, forcing “normal” out the window and costing the city about $15 million in lost revenues. Thanks to mid-year cuts and adjustments, the city is ending the fiscal year on an even note.

“I am proud of how our departments adapted to meet these everyday challenges,” said Battle. “We placed a limited freeze on hiring and cut operating budgets 5 percent, forcing everyone to do more with less.”

The City did not cut the budgets of outside agencies during the pandemic but asked them to consider reducing their annual appropriation by 5 percent for FY-21. Nearly every agency cooperated with the request, an indication of the community’s shared commitment to get through this pandemic together.

“The proposed budget is structured to meet the goals and objectives demanded by our growing city, to keep our reserves healthy and uphold the conservative fiscal spending principles that have made Huntsville a leader in municipal fiscal management,” said Battle.

Highlights of the FY-21 Budget

The City Council will hold a work session Tuesday at 5 p.m. to review the budget and is expected to vote on the spending plan Sept. 24.