Hoping to avoid “slippin’ and slidin’,” friends, officials and family gathered Tuesday night in MidCity District for a special unveiling.

The crowd braved the threat of rain to celebrate the colorful tribute that will serve to forever immortalize the life and music of Richard Wayne Penniman, famously known to the world as “Little Richard.”

Hosted by the MidCity Development team and with the blessing of the Penniman family, the unveiling of artist Logan Tanner’s vibrant mural in a formal presentation will allow Little Richard’s story to live on in the form of a visual masterpiece.

“It is a special moment for the Penniman family,” said David Person, the family’s representative. “On behalf of the family, I would like to thank all of you for being here tonight.”

“Richard had a special place in this city” said Dr. Byrd. “He was a person you would never ever forget. And if he knew you, he never forgot you.”

In 1957, Little Richard answered a higher calling. A calling which brought him to Huntsville. 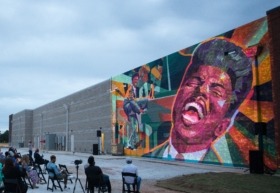 It was here Richard enrolled at Oakwood University to study for the ministry. Richard was inspired by E.C. Ward, then pastor of Oakwood. Richard entered to learn, and he departed to serve by becoming a traveling evangelist.

As an ordained minister, he officiated the weddings of Tom Petty, Cyndi Lauper, Bruce Willis and Demi Moore, and Little Steven Van Zandt.

As an entertainer with his glamorous sequin and rhinestone studded capes and suits, Richard was quite the visual showman as well as an exceptional performer. He was in the inaugural class of the Rock and Roll Hall of Fame as his career spanned seven decades. He was an inspiration to performers such as James Brown, Michael Jackson, Prince, and Tina Turner.

Driving in from the east, the 40-foot-wide-by-30-foot-tall mural adorning the side of Wahlburgers at MidCity is impossible to miss.

Capturing the essence of Richard’s high-energy antics, the mural presents Little Richard at the peak of his popularity in the late 1950s. The colors are bold and bright, with contrasting hues of orange, yellow, teal, turquoise, with a touch of purple, all serving to convey the liveliness of Richard’s performances. The projection mapping display by LED Orange at the end of the presentation, brought the mural to life – in synch with his music.

It was said that Richard’s charisma also was the magnet that brought people to the word of God.

He was laid to rest at Oakwood Memorial Gardens Cemetery but his spirit will live on at MidCity.