Did someone say there is an economic downturn due to the COVID-19 pandemic?

Well, the facts on the ground do not bear that out here, according to the Huntsville/Madison County Chamber of Commerce.

“With COVID-19, this has certainly been a challenging year, but in spite of all that is happening, Huntsville still continues to see job growth in all parts of our City,” said Huntsville Mayor Tommy Battle. “Whether it’s Torch Technologies in South Huntsville, Dynetics in Cummings Research Park, or TriRx in Chase Industrial Park, there are buildings going up and sites being delivered.

“When you combine that with the ongoing work at North Huntsville Industrial Park with Facebook and Toyota and the numerous projects at Mazda Toyota, it’s a remarkable statement to the resiliency of the Huntsville market and its industries.”

Year-to-date economic growth figures show the Huntsville metropolitan region has accrued more than $1 billion in capital investments from new commercial projects, company expansions, and from companies that have increased the scope of previously announced projects in 2020. That growth will also result in 852 new jobs across the region.

“Throughout 2020, Madison County and Huntsville have continued the work in bringing new and innovative business and industry to our community while also supporting expansions among our industry partners,” said Madison County Commission Chairman Dale Strong. “Our diverse economy continues to be robust year after year. With a focus on workforce development the future of the Rocket City and Redstone Arsenal will continue to drive the economy of Alabama and southern Tennessee.”

The bulk of the growth will come from four large Huntsville company projects and four smaller, but significant, projects this year. However, due to coronavirus restrictions limiting celebratory groundbreakings, grand openings and open house events, many of these projects have been operating under the public radar.

“We want to celebrate every expansion, but this year, it has been challenging to do that in a safe way,” said Lucia Cape, the Chamber’s senior vice president of economic development. “These companies are important to our community and to the people they employ, and we want to recognize their growth.”

Rendering shows the Freedom-Torch-Invariant facility from the south parking lot.

Torch Technologies leads with $32.3 million in investment on two recent expansion projects that will bring 120 new jobs to Huntsville.

First announced in April 2018, Torch has completed its Technology Integration and Prototyping Center (TIPC) with two-story office space and an attached 10,000-square-foot high-bay facility at the corner of Chris Drive and Vermont Road in South Huntsville. Constructed by its sister company, Freedom Real Estate & Capital, the center includes a 35,000 square-foot lab and solutions facility.

According to board member and Torch President & CEO John Watson the new facility will allow Torch to take on projects of greater complexity.

“These projects will range from developing instruments that will completely change how warhead testing is accomplished, to re-engineering products that protect our nation,” Watson said.

The second Torch expansion is part of a partnership with the Invariant, a Huntsville-based engineering services and software development company founded in 2001.

Invariant President David Anderson: “We have been neighbors with Freedom Real Estate and Torch Technologies for several years and look forward to continuing those relationships.” (Rendering/Invariant)

Invariant is investing $430,000 in a 92,000 square-foot facility as part of a mixed-use facility being built by Freedom in South Huntsville.

The facility will consist of office, research, development, and manufacturing space. They quietly broke ground in May and expect the facility to be complete by next summer. Invariant’s growth will produce 23 new jobs.

“We are excited to grow and expand into this new facility that will provide our employees the resources needed to ensure quality services and products are delivered to our customers,” said Invariant President David Anderson. “We are proud to be a part of Huntsville’s continuing success. We have been neighbors with Freedom Real Estate and Torch Technologies for several years and look forward to continuing those relationships.”

Japan-based freight and logistics provider Nippon Express USA will invest $19.1 million in its location on the campus of Mazda Toyota Manufacturing, U.S.A. over the next two years. They expect to hire more than 100 employees over that period.

After being acquired by Leidos in January, Dynetics will add up to 200 jobs associated with weapon development work, and has hired hundreds of people this year in support of the Human Landing System and other projects. The expansion brings the company’s local employment to 2,740.

Those four expansions represent a total of 510 new jobs and $71 million in investment. 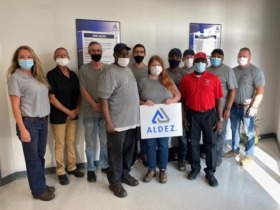 Aldez is an inventory management and distribution company and has a new facility near the sprawling Mazda Toyota Manufacturing facility. (Photo/Aldez)

“This new, state-of-the-art facility is a strategic move that will allow us to serve MTMUS manufacturing’s newest automotive facility in Huntsville, Limestone County, and enable further growth with their supplier base,” said Aldez COO Mike Byrne.

“These economic development projects have changed the future of our county by their investments and job creation,” said Limestone County Commission Chairman Collin Daly. “The opportunities provided to our community through these projects will have a lasting impact for years to come.”

TriRx Pharmaceutical Services celebrated its one-year anniversary in Huntsville in May. According to Timothy C. Tyson, chairman and CEO, the Huntsville Liquids, Creams and Ointments Facility has grown from a small number of employees to more than 250 people as of June.

“We would like to thank our employees, our customers, and our community for their amazing support,” said Tyson. “We continue to be focused on and dedicated to the patients we serve. This has been an exciting year accented by growth with a passion for delivering on our commitment to our customers. And we have just begun.”

Palco Telecommunications, a post-sales supply chain management company started in Huntsville in 1986; and Ridgeview Industries, Inc., a metal stamping and welded assemblies’ manufacturer for automotive OEM, have also among the announced expansions in Huntsville.

“It is exciting to see these quality organizations continuing to grow, building off of their previous successes and adding even more jobs in our community,” said Madison Mayor Paul Finley. “I am excited about the opportunities these companies bring for our region as we continue to grow together.”

Toyota Revs Up E-Learning Support in Madison County With Donation, Launch of...