You may not be able to beat City Hall, but you can sure build one.

Rendering shows the new Huntsville City Hall on Gates and Fountain Circle, across from the current municipal complex. (Rendering by Goodwyn Mills Cawood)

And the City of Huntsville will be doing just that.

The city unveiled architect renderings of its new City Hall planned for downtown.

The architectural firm Goodwyn Mills Cawood is overseeing the project and unveiled the renderings at Thursday’s City Council meeting.

The new City Hall will house all of the city’s departments. Currently, some departments, such as engineering, community development and inspections, are leasing office space outside of City Hall. 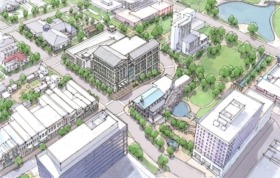 City officials have said moving all departments under one new roof will save money and be more energy-efficient.

The building will occupy the site of the municipal parking garage at Gates Avenue and Fountain Circle, across the street from the current building. The city had said plans call for six office levels and an adjacent five-level parking garage.

The city approved plans for the new municipal building last year because the current City Hall, which was built in 1963, does not meet Americans with Disabilities Act regulations, building or fire standards.

Also, citing the building’s failing structural integrity, facade issues and mechanical systems (elevators, HVAC and the like) that are “at the end of their useful life,” city officials agreed renovations would cause a financial burden.