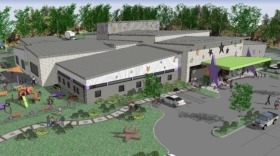 At the southeast corner of Holmes Avenue and Triana Boulevard sits a 5.5-acre plot of dry grass. Don’t be fooled by its barren appearance for something big is coming soon.

Here lies the future intersection of where culture meets community.

As part of the “Spotlight on the Future” capital campaign kickoff, the board and staff of Fantasy Playhouse Children’s Theater & Academy and city officials announced the development of the Fantasy Playhouse Theatre’s $10 million campus.

The 35,500 square-foot theatre is part of Huntsville’s master plan for West Huntsville, serving as the anchor for the Holmes Avenue pedestrian expansion. The new theatre will have 355 seats and the campus will include retail space and a café. But, most importantly, the new facility will have adequate capacity to teach tech theatre, which also includes lighting and set design.

As part of the city’s economic development plan, Fantasy Playhouse Children’s Theatre is growing. Along with other local businesses making an early commitment to the endeavor, Huntsville has dedicated $2 million to bring the new theatre to life. Thus, setting the stage for the Hillandale-Terry Heights corridor; with Research Park on the west end, Five Points at the east, and UAH and Fantasy Playhouse Theatre serving as the two main anchor points in between.

“It offers an investment in the arts, attracting people to our city and making Huntsville a better place,” said Mayor Tommy Battle. “The arts bring that creativity to us, making it necessary for us to grow.”

A new theatre and educational facility are long overdue. 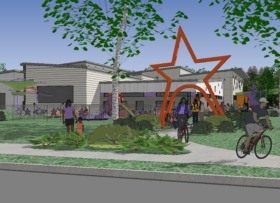 “This building, strategically set on the corner of Holmes Avenue and Triana Boulevard, will be a community asset to the Terry Heights neighborhood, prioritizing theatre arts access for all by engaging local underserved communities,” said Madison County Commission Chairman Dale Strong. “It is proven that an appreciation of theater arts builds in children self-confidence, academic success, creative-thinking processes, and future investment in their  communities as adults. Arts appreciation lasts a lifetime.

Now in its 60th year, Fantasy Playhouse Theatre has introduced more than 500,000 people to the magic of theatre. Fantasy has been in its present location on Long Avenue since 1997 and, for the past six years, it has been on a major growth trajectory. As a result, they have been bursting at the seams.

“Our community is the most important part of why we do what we do,” said Karen Mockensturm, Fantasy’s CEO. “The new Fantasy Playhouse campus will be a high-profile, accessible arts and culture destination for families, building on our organization’s legacy and providing the exact theatre arts education programming opportunities that families relocating to our area expect for their children.”

Monday’s event was the kickoff for the organization’s fundraising campaign, titled “Spotlight on the Future”. While final numbers have yet to be determined, Fantasy’s officials said recent estimates for construction costs range between $11 million and $12 million. Torch Technologies, The Daniel Foundation, Alabama State Council on the Arts, Facebook, Kiwanis Club of Huntsville Foundation, PPG, several private donors and the City of Huntsville have already pledged support.

To enable a free community space where ARTS and STEM education combine to create STE(A)M, Facebook is donating $150,000 to a technical suite.

“We’ve been absolutely inspired by the vision of the Fantasy Playhouse and its innovative new arts campus,” said Katie Comer, Facebook’s Community Development Regional Manager. “Its impact on Huntsville will be profound, reimagining the opportunities beyond children’s theater, extending into technical education, workforce development and community building, which aligns perfectly with Facebook’s mission to build community.

“We’ve been so proud to be part of the Huntsville community since we broke ground on the Huntsville Data Center in 2018 and can’t wait for this new arts campus to open.”