Tom Block was at a crossroads. 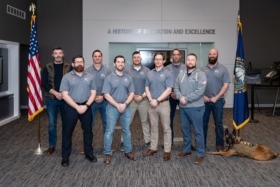 After leaving the Army, he was working for the Department of Homeland Security investigating child exploitation. The job gave him financial security, but he said he was covering “pretty rough material’’ and he wanted to look around.

He found what he now calls “home’’ as a member of the Warrior Integration Program (WIP), an 11-year old initiative operating within defense contractor BAE Systems. The giant defense contractor, which is currently looking to fill a WIP opening in Huntsville, opened a $50 million, 3,000-square foot campus in Cummings Research Park in September.

The WIP aids post-9/11 wounded warriors seeking jobs once they leave the military. Block, a member of the 3rd Ranger Battalion out of Fort Benning, was wounded in 2013 by a suicide bomber in Afghanistan.

“It’s been, honestly, a lifesaver for me,’’ said Block, who is now a subcontract administrator II for BAE. “It was a very, very hard time for me (at DHS). I was definitely looking for other options.

“I have a friend who works with Systems and he told me about WIP.’’

Alan Kenneally, a native of Ireland who emigrated to the United States in 1995, is the WIP’s program director. He was injured in an ambush while on his second tour in Iraq as an Army sergeant.

“We bring the individual on and set them up in different parts of the company,’’ he said. “Then, after maybe 12 to 15 months, they switch into a new role. There are more responsibilities, more tasks.

“We have senior leadership and managers who mentor and speak up for them and sponsor them in trying to get better opportunities. The only requirement to get into the program is honorable service and, unfortunately, have suffered some form of injury.’’

A formal education is not required for WIP applicants.

“It’s very, very accepting of individuals that have that lack of educational experience and drives home the fact that, yeah, we don’t have a degree or diploma but what we do have is years of training and experience and high stress,’’ Block said. “We have tools that can help us handle those types of situations.’’

Joe Wasley, the director of BAE’s Huntsville Business Center and the site director, said while BAE is looking to hire one person now, the goal is to have 250-275 employees within two to three years.

The current opening will be filled through the WIP.

“It would be a career in manufacturing, starting manufacturing and an opportunity to expand their career and sign on with a large international company,’’ he said. “We have 85,000 employees across the world, and we’re the fourth-largest defense contractor in the world.

“It’s a very large company with lots of opportunities to grow and expand your career here. We are really looking forward to landing a candidate for the program.’’

Applicants don’t have to live in the area but would have to relocate if hired.

“We’re looking at folks that are interested in things like manufacturing, production and what it takes to run a manufacturing operation,’’ said Bob Langell, director of Strategic Operations for the Huntsville Business Center. “There’s a lot of testing in diagnostics and working with engineers as technicians and assistance, anything along that realm of possibilities. Someone who’s interested in that kind of activity we’d be interested in talking to.’’

According to BAE External Communications’ Mark Daly, the WIP allows members to support those in combat.

“They still have a lot of friends that are out there, buddies that are still fighting,’’ Daly said. “This is one of the ways they get to continue to contribute even though they were discharged because they were injured.”