Sitdown with Success is a feature of the Huntsville Business Journal on entrepreneurs and their keys to success. This month’s subject is Bob Baron, founder/president/CEO of Baron Critical Weather Intelligence. 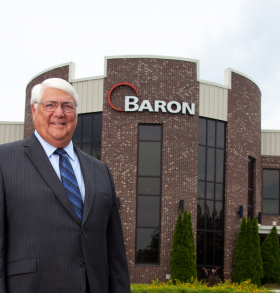 Many Huntsville residents will recognize Bob Baron from local TV weather and his famous “weather in motion,” but immediately following one of Huntsville’s largest, most destructive, and unexpected tornadoes hit the city in 1989, Bob Baron formed Baron Services to try and find ways to keep people all over the world, safer in dangerous weather events.

You were an on-air celebrity here and in Tampa as Chief Meteorologist in the 1970s and 1980s. Why did you take a more behind-the-scenes stance by starting your own company?

When the F-4 tornado struck Huntsville in November 1989, I was Chief Meteorologist at Channel 48. It came without warning and I realized that what I thought were weather tools were just weather gadgets.

I thought the community was well prepared for severe weather, but in analyzing the disaster, we determined that we needed to find a way to detect dangerous events; disseminate very specific advisories to those in harm’s way; and to effect immediate response. That detection, dissemination, and response had to occur within 10 minutes, or you started losing lives.

That has been our focus for 30 years.

What attracted you to the technical aspects of the weather?

I transitioned from radio to TV and then to TV weather around 1977. It was a glorious time as the first “big data”, satellites, and modern radar were launching at the same time as computerization. I loved working with both, and interfacing with the public on a daily basis; and every day we were either creating or introducing new technology to the public.

What are some of the technologies you have created and implemented since you started the company?

Our first product facilitated live radar and strike-by-strike lightning and allowed the user to zoom in on a storm, instantly draw out a direction and (area of threat), and then pull the communities at risk, as well as the estimated time of storm arrival.

Then we got into storm tracking. Over time we patented the ability to send alerts to cell phones of those only in harm’s way.

In the wake of the 2011 Super Outbreak of tornadoes, the Governor’s task force determined a need to have a statewide alerting system focused exclusively on those directly in harm’s way. Only our company could provide it, and it would take forever to have all state entities sign off on the system; so, we decided to provide it for free.

Over the last eight years, Baron has been providing the free Safety Net alerting service statewide. We have launched millions of alerts and anyone can still download the Alabama Safety Net free and receive not only the most precise alerting, but also a wide variety of other weather information like live radar and tropical weather data.

Why did you change the name from Baron Services to Baron Critical Weather Intelligence?

Baron is a national and international player not only in weather data but also Doppler weather radars. The company was chosen by the National Weather Service to upgrade all 171 of their Nexrad radar to next generation Dual Polarity.

Our official name remains Baron Services, Inc.  but over the years we adopted uses of “Baron Weather, home of Critical Weather Intelligence”, which speaks more directly to what we do.

What has been the hardest parts about developing weather technology?

If things were easy, everyone would be doing them.

Our development of early Doppler radars and more recently, building out the technology and hardware for Dual Polarity, which is sending out simultaneous horizontal and vertical signals that are then analyzed when those signals bounce back, may be the most challenging work we have done.

But we also felt a great sense of accomplishment developing the data stream, the hardware, firmware, and software to send over very narrow bandwidth to provide weather to the cockpit as displayed in real-time on all major avionics. For the past 17 years, that has been one of my favorite successes.

What vision do you have for your business in the future?

Our company has three major verticals: broadcast, international weather services, and what we call enterprise, which provides weather data in various formats to assist other developers.

This later effort is becoming quite successful as we add insurance and fleet customers, among others; and I see great opportunities for advancement as we are able to reach out to the marketplace.

We have developed a next generation TV broadcast system that also includes the ability to do traffic programs, and all of this is being extremely well received.

We recently finished development of a brand new next-gen processor for our radar market that allows us to provide a highly competitive product around the world that I’m looking to add to our marketing going forward.

What advice would you give to someone interested in getting into weather technology or the development of weather-related equipment, research, or work?

For me, most of my experience has been applied science – power user, if you will. But you also need the researcher. It is a team effort with room for success for everyone. I believe weather, the big umbrella, is a rapidly growing area both in applied meteorology and meteorological research.