The U.S. General Services Administration today unveiled design renderings for the new federal courthouse in Huntsville, in partnership with the U.S. District Court for the Northern District of Alabama. 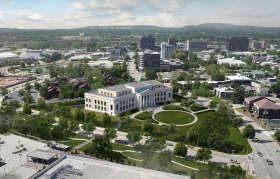 The new federal courthouse will be on a five-acre site at the intersection of Lowe Avenue and Gallatin Street.

Soon to be a prominent feature in Huntsville’s historic downtown, the three-story courthouse with a walkout basement will include five courtrooms and six judges’ chambers, as well as workspace for the U.S. Marshals Service, the U.S. Attorney’s Office, and the U.S Probation and Pretrial Services.

According to a release from the GSA, the design is neoclassical in style, with a large pedimented entry portico flanked by gently arcing symmetrical wings.

“The design incorporates modern security, sustainability and technological features necessary for a 21st-century federal courthouse, while integrating classical organizational, proportional and design elements. In addition, the design features a large formal public lawn with symmetrical plantings that will help both to create a sense of space and to focus the eye toward nearby panoramic views,” the release said.

“GSA is excited to give the people of Huntsville a glimpse into what their future downtown will look like through this courthouse design,” said Kevin Kerns, regional commissioner for GSA’s Public Buildings Service Southeast Sunbelt Region. “GSA strives to provide a state-of-the-art facility that meets the long-term workspace and security needs of our partners in the Northern District of Alabama.”

With an authorized budget of nearly $86 million, construction of the 123,000 square-foot courthouse is anticipated to begin in early 2022 and will take approximately 30 months to complete.

The five-acre property is at the intersection of Lowe Avenue and Gallatin Street. Steve White of Fentress Architects in Washington, D.C., is the project’s lead designer, and Lee Sims of Studio Scarab Architecture Interiors Planning in Montgomery serves as the courthouse designer. Payne Design Group Architects of Montgomery is providing bridging architectural services.

BeeZr – An ‘Excellent’ Addition to the Downtown Vibe