Orders for a Big Bad Breakfast in Huntsville are not on the menu for now, according to the popular restaurant’s chief executive officer. 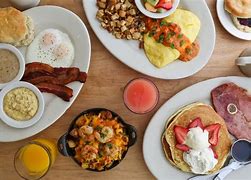 Travis Grappo, CEO of the restaurant founded by famed chef John Currence in Oxford, Miss., told Huntsville Business Journal that Big Bad Breakfast has “nothing scheduled in Huntsville at the moment.” Local news and social media outlets have reported that a new location was coming but cited no sources other than the restaurant’s website.

Along with its home location in Oxford, Big Bad Breakfast’s website currently lists “Coming Soon” locations of Huntsville, Memphis, Little Rock and a second in Nashville. It also shows its current cities of Inlet Beach, Fla.; Cool Springs, south of Nashville; Greystone and Homewood, south of Birmingham; and Florence.

Expansion of Big Bad Breakfast is booming despite the myriad issues in 2020 with the pandemic and recession. Grappo indicated a search and discussions for a site have been ongoing.

“Thanks for contacting us, but we have nothing scheduled in Huntsville at the moment,” Grappo said via email. “While we love that market, I think our marketing team may have made a mistake in putting it on the website. My apologies.

“We have been working diligently over the last 18 months to procure a location, but simply are not there, yet.” 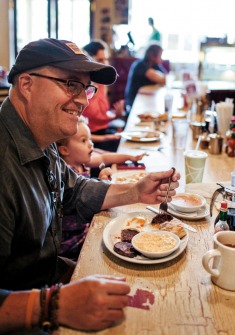 Currence is a native of New Orleans who worked his way through kitchens on a Gulf of Mexico oilfield tugboat and in Virginia, North Carolina and New Orleans before opening City Grocery in Oxford in 1992.

It found an overwhelming following thanks to its robust dishes, superbly stocked bar and wine cellar, and discerning guests. City Grocery is on the square in Oxford just doors from the popular Square Books and across from the iconic Lafayette County Courthouse.

Big Bad Breakfast opened in Oxford in 2008 on North Lamar Street just a few miles from downtown, and immediately became a hit. Standing in line for seating is to be expected.

The restaurant is part of Currence’s award-winning restaurants including City Grocery, Bouré and Snackbar oyster bar. His team also runs The Main Event, handling event planning and coordination. Currence was nominated from 2005-08 for “Best Chef South” by the James Beard Foundation and won the award in 2009.

Currence, on the Big Bad Breakfast site, explained his concept for the restaurant as offering from-scratch childhood comfort foods with elevated flavors.

“Things don’t taste the same now with the degree of processing and preservatives/stabilizers added to food,” he said. “I wanted people to taste the flavors of my grandfather’s patty sausage and my great grandmother’s biscuits. So that’s exactly what we did.

“We wanted to make everything we could from scratch, our biscuits, jellies, bacon, sausage, etc. We had our grits ground especially for the store. For our bacon we sourced the leftover pepper mash from Tabasco that we blended with dark brown sugar for the cure before we smoked a perfectly sweet, spicy, smoky strip of the best bacon ever. We would carry a simple egg plate to a new level and create dishes that would challenge and excite our guests who wanted more.”