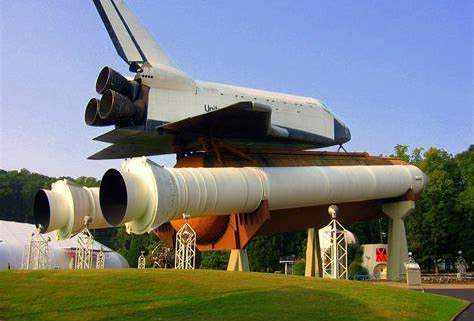 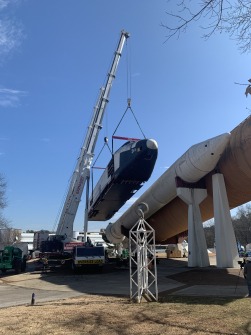 The U.S. Space & Rocket Center’s Pathfinder Restoration Project moved another step forward with the lifting of the Pathfinder shuttle orbiter off the external tank, where it has been on display for more than 30 years. After weeks of preparation, two cranes lifted the 127,000-pound shuttle test article to the ground in Shuttle Park.

The Rocket Center received a Save America’s Treasures grant for $500,000 from the National Park Service in August, and matching donations from several sources gave the Center the money to begin the project.

The next step is for NASA’s Marshall Space Flight Center to evaluate the interior structure of the orbiter. The full extent and timeline of the project are yet to be determined, but the Rocket Center expects the entire shuttle restoration will be a multi-year, multimillion-dollar project.

The Pathfinder shuttle stack was erected at the Rocket Center in 1988, and it has remained the only full-stack shuttle exhibit in the world.

The property of Marshall Space Flight Center, Pathfinder was originally used as a heavy-lift article to test handling, transportation and other procedures for the Space Transportation System, also known as the space shuttle. Pathfinder is a name NASA gives to articles used to test infrastructure and logistics for its programs.

In the early 1980s, the America-Japan Society paid to modify the structure with plywood and fiberglass to resemble a real orbiter and displayed it from 1983 to 1984 at an exposition in Tokyo. After the expo, Pathfinder returned to Huntsville and was mounted for the display at the Rocket Center.