When the Solid Waste Disposal Authority ended its long-time contract with Republic Services, glass recycling went right along with it. 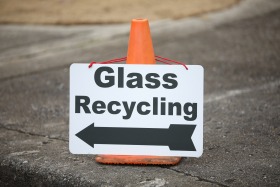 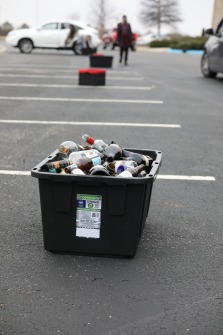 For many years, Republic’s recycling center was a popular destination. There were several bins where recyclables, such as plastics, paper, and cardboard could be conveniently dropped off. There were also two large bins dedicated for glass recycling. The glass bins were often full to the point of overflowing.

Since taking over recycling services, the Recycling Alliance of North Alabama, has provided residences with blue recycling carts and has a monthly pickup of everything – except glass.

The elimination of glass recycling in Madison county has been a concern for many, especially now, as glass continues to accumulate in the area’s landfills.

To address this concern, a local woman decided to start her own glass recycling business.

“I’ve been collecting glass since October,” said Moriah Fordham, owner of Phoenix Glass Recycling. “The goal is to reduce the amount of glass being thrown away and give it a second life.”

It’s no secret that glass packaging is superior to plastic. Glass is nonporous and impermeable, so there are no interactions between glass and its contents, thus ensuring that any product inside a glass bottle keeps its strength, aroma, and flavor.

Glass is also infinitely recyclable. A glass bottle or jar can be made into a new one many times over, without compromising the quality or purity of its contents. It takes less energy to produce new glass bottles and jars from recycled glass.

The renewal of glass from its recycled elements. Fordham named Phoenix Recycling after the mythical bird, which could be reborn after bursting into flames.

Eight years ago, Fordham moved to Huntsville from Oregon to take a job at the Space & Rocket Center. Unfortunately, she was part of the massive COVID-19-based layoff. Like everyone else who happens to stay here longer than a week, Fordham grew attached to Huntsville, its natural beauty, and the temperate climate. 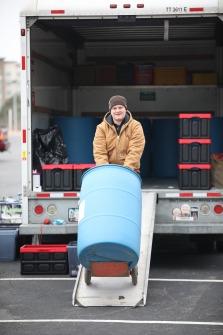 A barrel of glass is wheeled into the back of one of two 20-foot U-Haul trucks. (Photo/Steve Babin)

Growing up in Oregon, Fordham knows firsthand of the importance of having glass recycling. She also knows there’s sweat-equity involved.

After collecting the glass, Fordham cleans and removes the labels. The next step is to use machinery to pulverize the glass into cullet, the super-fine pieces of crushed glass.

By using cullet, manufacturers save on raw materials and lessen the demand for energy, thus leaving a smaller carbon footprint.

In addition to bottles, cullet has other applications. Construction and roadways use cullet, mixed in with cement and asphalt. Cullet is also used as artificial sand, which is beneficial to beaches to help stem coastal erosion. It can even be mixed with clay soil to improve its quality.

Fordham recently hosted a recycling day in the parking lot of the Space & Rocket center. Despite the cold and the wind, there was a huge turnout. The event was so well received that Fordham ended the event earlier than planned, there was just that much glass brought in. In fact, there were two 20-foot U-Hauls filled with glass.

Because of the overwhelming success of the first event, plans for future community glass recycling days are underway.

Fordham is doing her part to getting glass out of the landfill and transform it into something shiny and new, just like the Phoenix bird, rising up from the ashes.