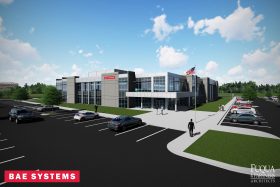 “It’s rainy outside but we have sunny news today.”

And, with those words, Joe Newberry, past chair of the Huntsville/Madison County Chamber, began Monday’s economic announcement.

BAE Systems announced a $45.5 million project to expand its operations in Huntsville’s Cummings Research Park. The expansion will bring hundreds of jobs and the new building is expected to be complete in 2019.

“This puts us close to our customers,” said Bill Staib, deputy vice president and general manager of survivability, targeting, and sensing solutions for BAE Systems. “There is an extremely rich talent pool here … and we’re going to tap into that.

Plans include the immediate expansion of BAE’s offices on Discovery Drive and the development of an 83,000-square-foot, state-of-the-art manufacturing and office space facility on a 20-acre site at the intersection of Old Madison Pike and Jan Davis Drive. BAE is working with developer Samples Properties, Fuqua & Partners Architects and Pearce Construction on the project.

Staib said it will be about half manufacturing and half office space for engineers doing development work.

He said the expansion will allow BAE Systems – the third-largest defense contractor in the world – to establish a closer working relationship with its critical customers in the U.S. Army and the Redstone Arsenal community. Work will consist of new programs and existing business, including the design, development, and manufacturing of precision munitions and aircraft survivability technology.

“We’ve been working on the project for eight years,” said Huntsville Mayor Tommy Battle. “BAE has people in Huntsville for six months looking over the community.”

Chip Cherry, president and CEO of the Chamber, agreed that deals like this take time.

“We met with BAE Systems’ senior leadership at the Farnborough International Air Show in 2016 to discuss the advantages of being in Huntsville/Madison County,” he said. “We are at the Air Show again this year meeting with more companies about establishing and expanding their presence in Huntsville.”

The news brought sunlight to the rainy day – a harbinger of things to come?

“We’ve got a great team to let people know Madison County is open for business,” said Madison County Commission Chairman Dale Strong. “I truly believe our best days are ahead.”