Small businesses across North Alabama are getting a $5 million boost from a new program that will provide access to $5,000 to $25,000 microloans.

Orlando and Tawanda Pitts and their cleaning business, Office Pride, based in Madison, are already a Redstone small business loan success story. 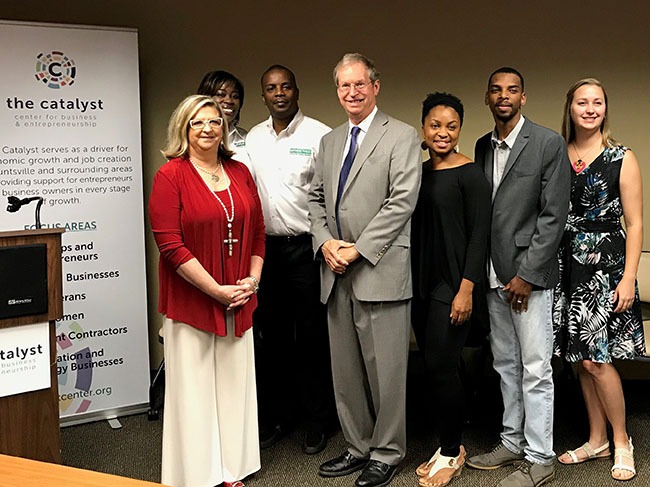 Microloan program announced Monday is a new way to keep small businesses going and growing through a partnership with The Catalyst, Neighborhood Concepts Inc., and Redstone Federal Credit Union.

“We started our company with a dream, a mop bucket and vacuum cleaner,” Orlando said, recalling how a loan officer coached him and his wife through the process. “We only had about five employees at the time … and over the past three or four years we have grown and now have 78 employees.”

He said it was small loans along the way that made the difference.

“That one key, ‘Yes,’ was instrumental in us getting on the right path and helped us grow and turn our thing from a business into a company,” Orlando said. “I knew we were finally in a good place when (the loan officer) called asking if we needed some money.”

Orlando was able to tell him “No.”

“Small businesses make up 94 percent of the companies in the Huntsville metro area,” said Joe Newberry, president and CEO of Redstone Federal Credit Union. “Many of these are small shops and start-ups that need immediate access to microloans to stay afloat until the next big order or contract comes through.”

Newberry said partnering with the two nonprofits to provide a much-needed funding boost will give small businesses a better chance at success.

Emmie Mayne, owner of Lightning and Lace, LLC, based at Lowe Mill in Huntsville, said The Catalyst program she went through prepared her for starting her business in which she uses 3-D printing, sewing and embroidery, among other techniques to create custom pieces for clients.

“Redstone has been with me the whole way and as my business is growing, I’m constantly looking to offer new processes … and that means looking for new and better equipment and as we grow the microloan program … it’s giving me what I need to grow,” she said.

“The real winners today are the small businesses in our community,” said Mary Ellen Judah, executive director, Neighborhood Concepts Inc., (NCI) a nonprofit committed to strengthening neighborhoods through the development of affordable housing and the advancement of economic opportunities in those communities. One tool used to get there is the North Alabama Revolving Loan Fund, which will be used to facilitate BAM.

Redstone is providing a $5 million loan to NCI, which will use the funds to grant loans between $5,000 and $25,000 to small businesses. NCI has other funding options as well that go up to $250,000, Judah said. But it’s the microloans that are often requested by small business owners.

“If we can deploy $5 million in small business loans it is not only substantial to our economy but also to us as a nonprofit,” Judah said. The $5 million loan fund will support itself and help the nonprofit maintain its status as a community development financial institution. NCI was among the first in the state to earn the designation.

Support services for the loans, from application and after it’s granted, will be handled by The Catalyst. A loan clinic will be held the first Tuesday of every month from 8:30 to 9:30 a.m. at The Catalyst office at 515 Sparkman Drive in Huntsville, Randolph said.

Ariel Foster, founding director of Elyon’s School of Dance and Performing Arts, said the timing of the microloan program has been perfect for her new studio, which will soon have its grand opening in Meridianville.

She said knowing the smaller loans are an option gives her peace of mind and a sense of stability “because of the power of economic partnerships and community building from the inside out.”