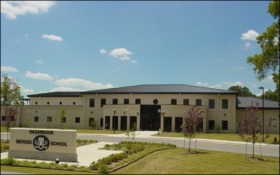 Pictured is the FBI’s Hazardous Devices School on Redstone Arsenal

Huntsville’s moniker as “the Federal City of the South” was further bolstered Thursday with the announcement of a planned FBI expansion.

The FBI, which has about 300 personnel stationed at Redstone Arsenal, will add another 1,350 employees, according to the agency’s senior executive at Redstone, Robert Hamilton. The personnel will come from the Washington area.

Hamilton made the announcement at the annual Redstone Update, hosted by the Huntsville-Madison County Chamber.

“The FBI is extremely excited to announce today that we are moving forward with our first large-scale operations support building,” Hamilton said. “We expect that to be ready for occupancy in early 2021. This will move approximately 1,350 personnel and contractors from the national capital region.”
Hamilton said the personnel will include special agents and intelligence analysts.
“This is not a relocation of resources but rather a transformation of mission sets to one extremely powerful campus,” Hamilton said.