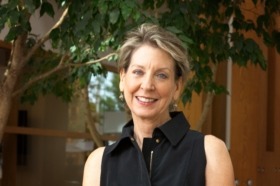 Lynne Berry Vallely has been honored for serving Alabama Humanities.

BIRMINGHAM — Lynne Berry Vallely has been named the recipient of the 2019 Wayne Greenhaw Service to the Humanities Award, the Alabama Humanities Foundation Board of Directors announced.

Vallely, former AHF chair and longtime member of the board, will be honored with the Greenhaw award Oct. 7 at The Colloquium at Birmingham’s The Club. The award, named in memory of the author and former board member, is given to a past or current AHF board member who has contributed significantly to serving Alabama Humanities.

“My long association with the Alabama Humanities Foundation has been one of the great joys of my life,” Vallely said. “It was a privilege to work with talented staff and board members to share Alabama’s rich heritage, particularly its fascinating literature and history.

“I am especially delighted to have been chosen for the award named for Wayne Greenhaw, who was a dear friend and mentor.”

A native of Huntsville, Vallely is a graduate of Lee High School and Vanderbilt University. She retired after serving as executive director of the HudsonAlpha Foundation.

She was the founding executive director of the Community Foundation of Huntsville/Madison County. She has served in the offices of former U.S. Rep. Bud Cramer and U.S. Sen. Jeff Sessions.

“Lynne was an outstanding board member and chair, and she served our organization with great energy and enthusiasm,” said AHF Executive Director Armand DeKeyser. “Her leadership set the standard that will serve us well in years to come.”

She was in Class 1 of Leadership Huntsville and is a past board chair, 1992-1993. Vallely proposed and established Huntsville Hospital’s Community Health Initiative in 1996. She received the 2018 Women’s Economic Development Council’s Women Honoring Women Award.

Playing leadership roles in service to the community, Vallely has worked in positions that promoted Huntsville’s tourist attractions, preserved its historic sites and protected the area’s natural environment.

Marshall to Lead Lunar Lander Program with Huntsvillian in Charge