“In the tradition of our founder Mr. George Jenkins, we at Publix we are intolerant of waste,” said Publix President Kevin Murphy. “As involved and responsible citizens in our communities, we are doing something about it.

“By establishing our Perishable Recovery Program with the Feeding America Network of food banks in 2007, we’re now able to stay connected to our local communities and area food banks.”

Murphy said the company gathers perishables from the deli, meat, produce and dairy departments, “wholesome foods that are safe for consumption but unsaleable,” and donate them to member food banks.

“To date, Publix has donated more than 285 million pounds of perishable food to food banks through the Perishable Recovery Program,” he said.

Shirley Schofield, executive director of the Food Bank of North Alabama, said there are about 142,000 people in North Alabama who are food insecure, and about 70,000 of them are children.

“That averages out to be one in five kids who don’t know when their next full meal will come, or where it will come from,” said Schofield. “We work with 250 partners in the area from soup kitchens and shelters, and we have daily pick-ups at all Publix stores. They also do two food drives for us every year.

“They are very involved in the community and understand hunger issues.” 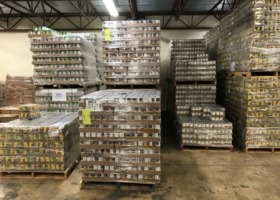 Tina Johnson, treasurer for Publix Charities, said the company receives hundreds of requests and Publix then identifies organizations that are doing work in the communities and allocates foundation resources to support their efforts.

At the launch event, Publix Charities also announced donations to Loaves and Fishes in Colbert and Lauderdale counties; Cullman Caring For Kids; and The Link of Cullman County.

“I rarely get the opportunity to see our associates bring our mission service to life,” said Murphy, “Today I get to see the impact of our support in the communities where we have the privilege of giving back.”

Overall, Publix Super Market Charities has donated $5 million in support of 245 nonprofit agencies throughout the Southeast, including 32 Feeding America member food banks and the 11,000+ agencies they serve. With this current donation, Publix has given more than $22 million to hunger relief efforts in the last 5 years.