If the first few days are a predictor, one of Huntsville’s newest eateries is headed for success.

Bad Daddy’s Burger Bar, which opened Sept. 23 in the new Times Plaza at 2317 Memorial Parkway, launched with a big turnout.

The place was even buzzing with staff hurriedly serving tables full of patrons at 4 p.m. two days later.

The restaurant, the chain’s first in Alabama and 37th nationwide, advertises “Chef-driven burgers, chopped salads, artisan sandwiches, and local craft beers.” The motif has a Huntsville flavor with artwork from local photographer Olivia Reed part of the decor.

The first Bad Daddy’s opened in 2007 in North Carolina.

Times Plaza assumed the address once occupied by The Huntsville Times. Former Times employees gathered to recount old stories and check out the culinary and craft beer offerings during a “soft opening” two days before the burger bar opened to the public. 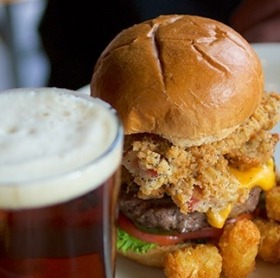 This is a Bad Ass Burger by Bad Daddy’s. (Photo/Bad Daddy’s Burger Bar)

There were some 32 former employees visiting their old haunts with a combined 791 years of service with the newspaper. Among them were this reporter and Huntsville Business Journal editor Bud McLaughlin, who gave the restaurant’s signature Bad Ass Burger a review of “excellent.”

The burger is billed as featuring a 10-ounce beef patty, housemade American cheese, horseradish mayo, lettuce, tomato, pickle and, according to McLaughlin, the star of the ensemble: “Deep-fried bacon.’’

While Bad Daddy’s churns out food where The Times’ newsroom once churned out stories, the site that housed the former production building includes Super Chix, Stone Age Korean Steakhouse and Regymen Fitness.

Super Chix is based in Dallas and specializes in frozen custard in addition to chicken.

Stone Age, operated by local restaurateur Min Liu, will be all-you-can-eat barbecue with an eclectic mix of vegetables, sauces, and other sides.

I-565 Night Work at Town Madison Set
Scroll to top