The Rocket City Trash Pandas have announced the appointment of a veteran culinary director and award-winning Executive Chef to lead the team’s food and beverage operations.

Mary Nixon, who has worked with several Minor League Baseball teams as a food service consultant and catering director, has been named Vice President and Executive Director of BallCorps Food and Beverage, LLC.

Ryan Curry, whose skills have been recognized in local, national and international media, will be Toyota Field’s Executive Chef & Assistant Director, Food and Beverage Operations. 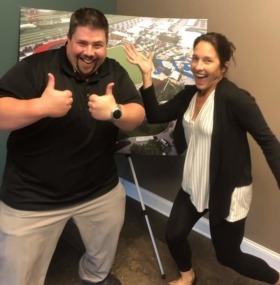 Ryan Curry and Mary Nixon have some exciting food plans in store for Trash Pandas fans.

“In every aspect of our operation we have strived to build a unique, Major League-type experience,” said Ralph Nelson, Trash Pandas President & CEO. “Today, fans are expecting more than just popcorn and hot dogs; food and beverage is an essential component of the fan experience.

“I am certain Mary and Ryan will provide an unforgettable culinary experience for our fans.”

Curry was most recently Executive Chef with the Albuquerque Isotopes of the Pacific Coast League, where his Tumbleweed Burger (a cotton candy-topped burger) was named by the international publication VenuesNow as Best New Concessions Food Item in 2019. His Green Chile Peach Flambé was runner-up for the same award in 2018.

A native of Sacramento, Calif., Curry graduated from the California Culinary Academy in San Francisco. With 24 years’ experience as a professional chef, Curry has worked for Major League and Minor League teams, as well as restaurants, country clubs, resorts and hotels on the West Coast from California to Alaska. As Executive Chef with the Sacramento River Cats in 2010, his work was recognized by SI.com as one of the 10 best in Minor League Baseball.

“Minor League Baseball is such an amazing experience to be a part of,” Curry said. “Fans are here for great baseball, which the Trash Pandas will no doubt deliver. But, it’s my responsibility to make sure the food delivers a memorable experience as well.

“Stadium food offerings can no longer be plain hot dogs and hamburgers. Fans want fresh and creative offerings…menu items that motivate them to go to work the next day and ask a co-worker if they’ve tried the ‘such and such food item at Toyota Field’ and, if they haven’t, they need to go check it out.”

“I am excited to join the Trash Pandas and provide an extraordinary food and beverage experience to our fans,” Nixon said. “We undertook an extensive nationwide search for an executive chef, and Ryan was – hands-down – the choice. Our fans will be amazed by his creations.”

“Baseball is the main show at Toyota Field, but when fans are trying our food, I want them to forget for just a moment that they’re at a baseball game,” Curry said. “Then I’ve done my job.”