With the opening of its new facility, Kutta Technologies plans to implement what they and the Sierra Nevada Corp. call their first integration model here in Huntsville.

As that demand grew, Sierra Nevada saw an opportunity to expand that expertise into its Integrated Missions Systems business in Huntsville. Now a wholly owned subsidiary of Sierra Nevada, Kutta has 65 employees and is growing. 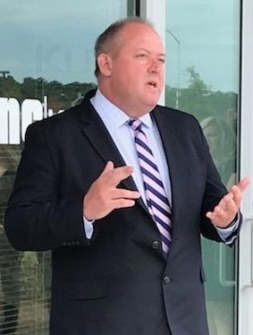 The new location at 4000 Market Street in the new Redstone Gateway, just steps outside Redstone Arsenal Gate 9, will help Kutta increase its presence and footprint on Redstone Arsenal.

“Sierra Nevada is a very innovative company with four business groups,” said Tim Owings, executive vice president of Integrated Missions Systems for Sierra Nevada. “Our space team is involved in the development of the Dreamchaser, so we are building our own spacecraft. In aviation we have our own surveillance aircraft; we have people here involved in electronic warfare; and we have people working in cyber.

“All those intersect here in Huntsville … a sort of melting technology pot and integration model for Sierra Nevada that we are all really excited about.”

For the past eight years, Kutta has shared space on Discovery Drive with Sierra Nevada. Owings said they have built great new friendships and great working relationships during that time.

“Kutta is on a roll right now and we owe that to Tim Owings and Sierra Nevada, who have made it possible,” said Matt Savoca, executive vice president of Kutta and one of the company’s founders. “UAS is one of our biggest customers and they along with our vendors are on Redstone Arsenal. Our software controls all of the small and large unmanned vehicles at Redstone and it has been a passion of ours to expand our unmanned aerial systems capabilities in Huntsville.

“We are excited and proud to be part of the Huntsville community.”

According to Owings, some more big announcements concerning Kutta and SNC are upcoming. 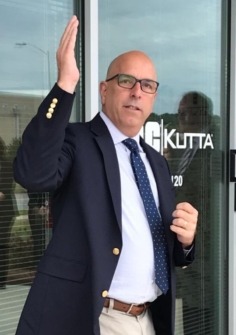 “Kutta is on a roll right now and we owe that to Tim Owing and Sierra Nevada” – Matt Savoca, executive vice president of Kutta. (Photo/Kimberly Ballard)

“The next part of all this is – you have to win some work! Sometimes timing is everything, and last week we saw an announcement about two major programs we have been selected to win,” he said.

“One is a very large program hatched out of the United Kingdom that we will be doing work for out of this office; but more important locally is the EMARSS-E contract with L3 Technologies.”

The Enhanced Medium Altitude Reconnaissance and Surveillance System (EMARSS-E) contract is an aircraft integration contract to develop up to two EMARSS prototype aircraft. Owings said the initial contract award is around $30 million.

“If we are going to build airplanes in our Huntsville hangar in Meridianville, we are also going to support them engineering-wise,” Owings said. “The program office for that will be run from Huntsville so that’s a big deal towards what we are trying to achieve here. However, there is a lot of aircraft follow-on from that contract that has the potential for hundreds of millions of dollars over time as we provide more of these platforms.”

Today, the Huntsville office is hosting Sierra Nevada’s quarterly technology meeting and, according to Owings, the entire senior leadership from SNC will be at the new Kutta office.

Savoca and Owings also gave a shout-out to the Huntsville-Madison County Chamber of Commerce who presented them with a new membership plaque.

“The Chamber always does a fabulous job with these things and is supportive of everything we’ve done,” said Savoca. “The entire city and its culture have really embraced what we want to do, so ‘Thank You’.”