There’s a brand new eatery in an old familiar place with the same eclectic vibe for residents of Five Points in east Huntsville. 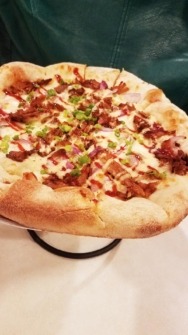 Mario’s brings a slice of Italian cuisine to Five Points.

Mario’s Five Points, which had delivered pizza while sharing space with Galen’s restaurant for a few years, now occupies the entire building at what many city residents knew as Mullins Drive-In for decades.

Mullins, famous for its chili dogs and broasted chicken, was long a fixture in the Dallas and Lincoln Mill villages that make up a large part of Five Points. Galen’s, a popular restaurant in New Hope, gave it a go in the city but left to pave the way for Mario’s.

Mario’s, which began with only pizza deliveries, started dine-in service Nov. 8 and is becoming a fast hit in the area. The restaurant still delivers in an area around the store, but Grub South also delivers and provides service throughout the city.

“We’ve had a lot of good feedback and the reviews have been positive,’’ said Dan Thompson, manager, military brat and once a Five Points resident. “We’re seeing significant growth week after week.

“We’re starting to see a lot of repeat customers.’’

“He’s been in the business a long time,’’ Thompson said. “He developed a dough recipe. It’s a special proprietary recipe. I’m not allowed to know it. It’s a lot of secrets.’’

The counter in the original part of the building is still there. A large kitchen where most dishes are made from scratch, the Mario Room and the Colorado Room are in the addition Mullins made many years ago.

The motif is dedicated to Five Points and Huntsville. Photos of old landmarks such as Star Market, Tip Top Cafe, Dunavants Mall and the Lyric Theater are just some of the venues featured. 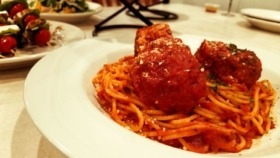 Classic spaghetti and meatballs is a favorite dish.

And there’s much more on the menu than Mario’s Signature pizza. Appetizers, calzones, pasta, salads and sandwiches are available and on Sunday there is a brunch menu.

Thompson, who said he eats at the restaurant daily, said the Signature pizza, Caprese Skewers, Baked Ziti, Power Green Salad, Meatball Hoagie and Pork Scallopini are among his favorites.

For brunch, Chilaquiles, Caprese Traitor Eggs and Italian Hot Brown, which is a twist on the Kentucky version, are popular.

Mario’s has arcade and board games and a drawing wall for children and even a ping pong table. A soundstage is moved in for live music some nights, and there are trivia contests.

Thompson said most of the employees are from the neighborhood and bring “pride in Five Points and in just being a human being.’’

Mario’s is open 2-10 p.m. Tuesday-Sunday. The Sunday brunch menu is available from 10 a.m.-2 p.m. Mario’s specializes in catering, sells local art off the walls without taking a commission and will open a patio in the spring.

And it’s all done with a Five Points attitude.

“That’s what we’re trying to capture,’’ Thompson said. “We have everything from people wearing three-piece suits to hippies wearing bathrobes come in here.’’