MADISON — Just weeks away from the Rocket City Trash Pandas throwing their first strike at Toyota Field in Town Madison, the Madison Chamber of Commerce heard from the “Voice of the Trash Pandas,” Josh Caray. 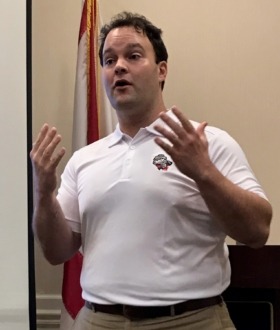 Josh Caray: “It’s about fun, whether you are a baseball fan or not.” (Photo/Kimberly Ballard)

Caray, the team’s Director of Broadcasting and Baseball Information, gave the Chamber a preview of upcoming attractions during its quarterly luncheon at the Best Western Plus on Madison Boulevard.

“Thank you for being the home of the Rocket City Trash Pandas. It’s been wonderful getting to know the community and we look forward to a very long and prosperous relationship,” said Caray. “It’s been a long journey … we are very excited about what we and this community have to offer.

“It’s going to be the talk of the town not just this year, but for the next several decades to come, so we’re excited about it and happy to be a part of it.”

The Trash Pandas make their home debut April 15 in Toyota Field against the Mississippi Braves. They open their inaugural season April 9 in Birmingham against the Barons.

Caray gave an overview of coming attractions for the Trash Pandas and, as odd as it may sound, he said Minor League Baseball is not so much about baseball as it is a carnival atmosphere with a baseball diamond as its crown jewel.

“The great part about Minor League Baseball is that fans will see the best of what the Minor League system has to offer not only in the Trash Pandas, but in the talent on opposing, visiting teams,” he said. “Double-A baseball is a must-stop if you are a big-time prospect.

“At some point, whether a player starts in rookie ball, Single-A, or High-A, they must stop at Double-A at some point [on their way to the Major League] because it’s such an important point of development.

“One day in two or three years, you will flip on the television and see them playing in the Majors, perhaps play in or win the World Series and say, ‘I remember when I saw him hit a ball out of left field in my ballpark’ or ‘I have an autographed picture of me with him’. It’s fun to watch how they are succeeding in their professional careers.”

Fans of the former Huntsville Stars saw that very scenario play out in Jose Canseco and Mark McGwire.

The other things to understand, he said is that Minor League Baseball is about the experience.

“It’s about fun, whether you are a baseball fan or not,” he said. “You want the Trash Pandas to win, but if they don’t, it’s all right. We want you to watch the game, but we also want you to get up and walk around.

“Baseball is a long game, three hours in most cases and you won’t be able to keep the kids still that long, so walk them over to the (Kids Zone) playground; visit the Team Store and buy some merchandise; go up to the Rock Porch and have drinks with friends; visit the stadium restaurant. And if, at the end of the game you forgot who won or what the score was, so be it.” 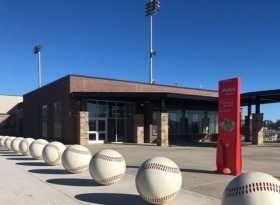 Toyota Field will be open year-round and host concerts, weddings, parties, business meetings and the like.

One of the unique aspects of Toyota Field is that it will be open year-round. Caray said there will be concerts and festivals in the ballpark and there will be a hospitality area for weddings and wedding receptions, bachelor parties, company outings, holiday parties and a place for team-building sessions.

The Trash Pandas just hired Executive Chef Ryan Curry, recently named one of the best chefs in Minor League Baseball and there will be a wide variety of great food at the stadium. Panera Bread Company, Outback Steakhouse and The Hub will all be within walking distance of the stadium.

Caray said the field has a 360-degree open concourse so if you have seats behind home plate, you can still get up and walk around the entire complex and still see the game.

“Go sit out on the berm and get a suntan; go watch from the outfield or the (Inline Electric) Rock Porch next to the video gameboard ….,” he said. “When it’s hot, there is an air-conditioned suite area with an outdoor patio, so you have the best of both.”

The stadium holds 7,500, including fixed seats and standing-room. There is a party area beyond the bullpen along the left field wall; hospitality suites that seat 75 to 90 people, perfect for group meetings and parties; and a picnic area for large groups of up to 400.

There are also six single-game suites seating up to 25; and the SportsMed Stadium Club along the first-base line that can be booked as well for non-game day events.

Next season, the Hotel Margaritaville should be up and running and the ballpark will be integrated with it, a lazy river, and a swimming pool.

“We are building a year-round revenue-generator with the baseball park as its crown jewel and fun built up all around it with apartments, homes, high-rises, brewhouses, restaurants, and retail outlets,” Caray said.

Caray said single-game tickets go on sale March 14 and will range from $8 to $20. There are still some season tickets available and sponsorship and business opportunities available to get involved with the team.

Since the Trash Pandas’ store opened at Bridge Street Town Centre in November 2018, they are closing in on $3 million in merchandise sales (at the store and online) with customers from as far away as Bora Bora, Paris, Ireland and Alaska.

Furthermore, the Trash Pandas have more than 10,000 Twitter followers and they haven’t thrown a single pitch!

For Caray, broadcasting baseball is a family tradition as he comes from a long line of famous baseball broadcasters.

Josh’s grandfather was Harry Caray, a 53-year Hall of Fame baseball broadcaster best known as the voice of the Chicago Cubs during the 1980s and 1990s when the Cubs aired nationwide on Superstation WGN.

“My dad was behind the mic when Sid Bream slid across home plate to win the 1992 National League Championship Series on Frank Cabrera’s big hit, and when Marquis Grissom made that winning catch in the 1995 World Series,” said Caray.

All Trash Panda games will be carried live on WUMP 730 AM and 103.9 FM. They will also be streamed online using the TuneIn app, and all home games will air via video streaming on MiLB.com (https://www.milb.com/live-stream-games/subscribe).

Q&A with Sen. Doug Jones: Of Ships, the Wall and Budget Redirection
Scroll to top