For 51 years and counting, the Greater Huntsville Humane Society has continuously grown to meet the needs of the community’s animal population.

In her first year as CEO, Anne Caldwell is taking GHHS to the next level with a new business model and relocating the Thrift Store while expanding animal service capacity at the shelter.

The new thrift store opening is slated for late summer, early fall. The current store was supposed to reopen June 16. However that has been delayed due to COVID19 and staffing issues.

Before the big move even begins, Caldwell hopes to sell off as much inventory as possible in hopes of recouping some of the revenue missed during the COVID-19 shutdown, along with reducing the amount of merchandise left to be hauled crosstown.

At 10,000 square feet, the location on Pratt Avenue will be more than double the space of the current shop. In addition to selling gently used merchandise, Caldwell has plans for expanding retail sales and hosting community events.

“What we’re trying to do with the new store at the new location, is to create something unique,” said Caldwell. “It will be a hybrid of what people would expect out of a thrift store mixed in with a gift shop.

“I think we are missing out on a pretty big opportunity by not selling merchandise that’s branded specifically to the Humane Society; t-shirts, mugs, bumper stickers

“Then, taking that idea one step further and carrying a few brand-new things, like pet clothes or toys. Things that people are going to think of around the holidays when they are searching for the perfect gift for the pet lover in their family.” 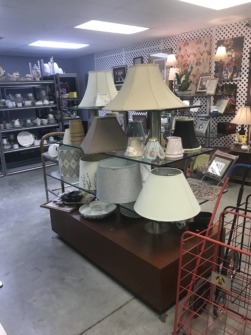 Caldwell’s plans include going well beyond the traditional thrift store business model. She hopes to host events, such as trunk shows and pop-up shops.

The store’s move is not just about facility expansion, it’s also about expanding capacity and providing services for animals that wouldn’t have anywhere else to go because of a contagious illness or disease.

“In addition to this cool, unique, innovative new spot that we’re creating for the store, we’re also leaving behind 4,000 square feet on site that we can now use for animal care,” said Caldwell. “That’s not only going to increase our physical capacity, but it’s also going to allow us to do a lot more than what we’re currently doing. Having that extra space in our backyard will allow us to have a proper isolation unit and a quarantine unit.”

Caldwell hopes the new thrift store will foster a welcoming experience yet remain true to the GHHS mission.

“We’ll make sure to have featured dogs and adoption events,” said Caldwell. “It’s going to be very clear that this store is not just a gift shop, it is an integral part of the Greater Huntsville Humane Society.”

With this new elevated breed of thrift store, Caldwell hopes to also enhance the perception of animal shelters and shelter pets.

“Shelters get a bad rep and I think sometimes, the public thinks of them as loud, chaotic, and dirty and all the dogs are just strays,” said Caldwell. “These preconceived notions are things that I tackle in every aspect of our operations.

“Huntsville is growing so fast, there are so many people here that are not originally from here. So even though the Humane Society has been around for over 50 years now, we are still encountering people who have never heard of us. That leads us to a really great opportunity to rebrand and capture a new demographic of people.”

Residential Sales Increase from April to May