It may look like a couple of cargo containers dropped off at the side of the road near Redstone Gateway. 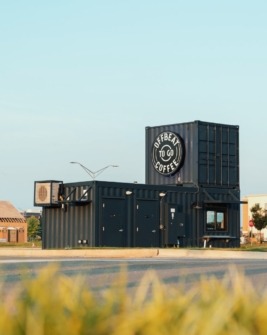 But it’s also the new location for Offbeat to Go, a drive-thru and walk-up coffee shop from the owner of Campus 805’s Offbeat Coffee Studio.

Inside the repurposed cargo containers, Offbeat to Go offers cortados, cappucinos and lattes, as well as teas, cereal milk lattes and baked goods.

“We could not have found a better opportunity than Redstone Gateway which is creating a place where people want to work and we want to serve those people,” said owner Kyle Husband. “We’re excited to get our coffee in the hands of people working at the Arsenal, Redstone Gateway and the surrounding areas with speedy drive-thru and walk-up service.”

James Lomax, Redstone Gateway’s director of asset management, said the office complex is excited about the opportunity for Offbeat to Go.

“Offbeat to Go adds an amenity that will serve current and future tenants at Redstone Gateway,” he said. “This homegrown company is just another testament to the economic impact of Redstone Arsenal.”