With the “sound of success” in the background and overhead, ground was broken on a $14 million, 208,000 square-foot Runway Distribution Center in the Jetplex Industrial Park at Huntsville International Airport. 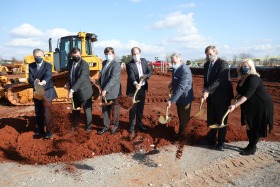 As the group of elected, civic and business officials  ceremoniously shoveled dirt, heavy equipment continued plowing the soil in the background, preparing the new spec industrial facility for its first tenant in July. The ceremony marked the official groundbreaking for Shamrock Investments’ fourth multimillion-dollar land investment in the Jetplex since 2017.

And, as if on cue, a cargo jet flew over the “runway” running alongside the development for which it is named, drowning out Shamrock Investments Vice President Bill Fleagle as he spoke about the new project .

“Since our first investment in the Huntsville in 2017, Shamrock Investments has seen Huntsville in general, and specifically the Port of Huntsville/Huntsville International Airport area, as an excellent location for strategic growth,” said Fleagle on an unseasonably warm and sunny February afternoon, . “We are very excited about the addition of Runway Distribution Center to Jetplex Industrial Park … and we appreciate the efforts of the City of Huntsville who helped make this project a reality while we continue to look for future opportunities to … expand our partnership with the greater Huntsville business community.”

He continued over the roar of the plane and laughter from the audience, “And we thank the Airport Authority and the Port Authority in helping us with the FAA, because as you can see, we are slightly close to the runway and were presented with some challenges to work through.” 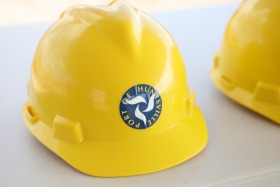 “The Huntsville community is on a roll from an economic development standpoint,” said Tucker. “We are pleased with the investments Shamrock Investments have already made and this endeavor represents the future … it is our goal to continue to work with them as partners to ensure success.”

“I think what you see here is a community that believes in partnership,” said Battle. “As partners your success is our success, and we look forward to some great successes here. As you do well, the city of Huntsville does well.

“We see that on a day-to-day basis with our companies coming out and employment being provided. It is really realized when you see the young people working inside a new facility who have moved up in their status to a job where they can … grow a family. And that’s what it’s all about – it’s about providing … something that gives everybody a chance to be productive citizens and make a living. So, thank you for your investment in Huntsville.”

Based in Birmingham, Shamrock Investments has three other properties at the Jetplex. The new facility adds to the company’s Huntsville footprint at the park to more than 470,000 square feet.

“It’s phenomenal the growth we have seen over the last few years,” said Cherry. “It’s just evidence of the faith that people like Shamrock have in this community and what’s going on here – in the growth, the development, and the vision you have. So, thank you for placing some of that investment here in the form of buildings and we look forward to the jobs it’s going to create, and you becoming a part of the fabric of this community.”

Strong agreed it is nothing less than phenomenal what is going on in Huntsville and Madison County.

“There is no better place to be than Huntsville and Madison County to grow this economy,” he said. “Thank you for your commitment. What you are doing here today makes our community stronger.”