MADISON — It began as a small family restaurant in Sauk City, Wis., famous for their ButterBurgers and fresh frozen custard made with Wisconsin’s renowned fresh dairy products. 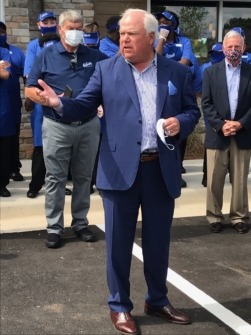 This week, founder Craig Culver joined new franchise owner Mike Hinesh and Scoopie the Custard Cone for the grand opening of the Tennessee Valley’s first Culver’s ButterBurger location. It is at the corner of Wall Triana and Brown’s Ferry Road in the Kroger shopping center in Madison.

“People here in Madison, Alabama are probably asking, ‘What in the heck is a ButterBurger?’” said Culver before an enthusiastic audience waiting to be the restaurant’s first customers. “Our signature burger is made with 100 percent fresh, never frozen beef, and gets its name from its lightly buttered and toasted bun.”

And Scoopie the Custard Cone?

Culver’s is equally as famous for its fresh frozen custard, a legendary creamy decadence from high-quality, fresh Wisconsin dairy. Culver’s offers three flavors of these frozen treats daily – vanilla, chocolate and a Flavor of the Day – each that can be customized with more than 30 mix-ins and toppings. 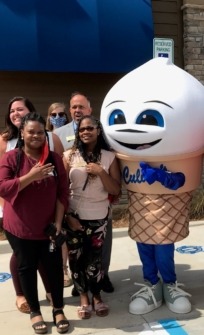 Scoopie is a hit with the customers. (Photo/Kimberly Ballard)

“We’re excited to open and become an active member of the community,” said Hinesh. “When Madison residents are looking for handcrafted meals and tasty frozen treats, we’ll be ready to safely serve them with the warm hospitality Culver’s is known for.

Other guest favorites include chicken sandwiches and fresh garden salads. Side options include crinkle-cut fries and Wisconsin cheese curds, a Dairyland delicacy.

“We started with one restaurant 35 years ago, never dreaming we would even have two,” said Culver. “Now we have 859 and I am traveling to three states today to open this location and two more, so we have been blessed and very fortunate over the years.”

But Culver said his restaurants are not just about food.

“What we are really in is the people business,” he said. “It’s all about putting smiles on people’s faces, giving people our heart, being a good person, a nice person inside or outside the business.”

As they opened the doors to hungry guests for the first time, Hinesh said, “We’re excited to have team members from the surrounding Madison community as part of our team. They are ready to serve!”