The site is shaping up on Sparkman Drive for the new North Huntsville Library and Berachah Park.

Contractors are on schedule for a fall completion of the joint $10.8 million project – a partnership between the City of Huntsville and the Huntsville/Madison County Public Library. 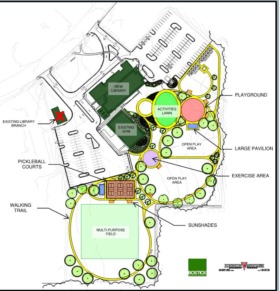 “This project accomplishes these goals with a beautiful new library and park that will serve the community for decades to come.”

The complex is being built at the site of the outdated Bessie K. Russell Library branch, which occupies just 1,700 square feet, at 3011 Sparkman Drive.

The new 19,000-square-foot facility is designed to meet the information-seeking needs of residents with state-of-the-art technology, a café, children’s reading areas, interactive literacy center and a makerspace for entrepreneurs.

“It will also feature some of the latest technologies such as a workforce development lab, a Makerspace with 3D printers, and an automated sorting machine.”

“We are so excited to show the North Huntsville community what their library can do,” said Laurel Best, Executive Director of the Huntsville/Madison County Public Library. “We will be able to expand the great service of Bessie K. Russell and offer more people an opportunity to use our computer and Internet services, participate in children’s programming and learn STEM-related activities and equipment in the Makerspace.”

For City Council President and District 1 representative Devyn Keith, the new library and park is personal.

“As a kid, I remember coming into the Bessie Russell trailer to do my Accelerated Reader points,” said Keith. “It amazing to have to have a chance to be part of this expansion and investment by the city and generous donors so that children will have a place that inspires and opens doors of opportunity.”

The library will be next to a new city park which will feature walking trails, pickleball courts, multipurpose fields, a pavilion and children’s play areas.

The project architect is Fuqua & Partners and the general contractor is Lee Builders. They expect to complete work on the site in October.

Devyn Keith ran to represent District 1 on the Huntsville City Council in 2016 vowing to make north Huntsville a destination.

With Keith leading the way, eyesore buildings bought by the city have been razed along North Parkway. There have been eight reduced to rubble so far and, if Keith gets his way, more will follow.

Blight isn’t welcome in Keith’s district where he grew up in the Northwoods development.

“We’ll be going after the rest of them shortly,’’ he said of privately owned buildings that have seen better days. “I’m not sure of the time frame.’’

Keith has been a mover and shaker since he unseated longtime District 1 Councilman Richard Showers. Just two years into the job, he was voted council president by his colleagues.

Meanwhile, he created the North Huntsville Business Association, which will soon move into office space near the corner of Oakwood Avenue and the Parkway in a strip mall that has been renovated.

Keith, who holds degrees from Samford and the University of Massachusetts, ran on the platform of reducing crime, increasing property values, investing in infrastructure and enhancing a vibrant quality of life for all of the district.

Some of his initiatives have already taken shape.

Along with the city, the Neighborhood Resource Center, a program that brings city government to the neighborhood, was launched. The Johnson HIgh School campus will soon become the Johnson Legacy Complex complete with indoor volleyball courts, soccer fields, a rock-climbing wall and even a sauna.

Those are just two of the projects Keith is overseeing.

There have been neighborhood block parties and ice cream socials. Streets are being repaved. The public library serving north Huntsville will move from a trailer into the new Berachah Park. There’s also the Council High Park planned for the site where the old building no longer exists.

One of the many empty buildings along North Parkway, the former Gander Mountain store, will soon be filled by Rural King, a farm/home department store slated to open in August/September.

For Keith, nothing is more important at the moment than erasing the blight that corrupts his streets.

“That was the first policy — start tearing things downs,’’ he said. “That was one of the things I ran on. Tearing down blight is a positive to let people know the city is serious about this.

Drive past the intersection of the Parkway and Lantana these days and there’s an empty lot where dilapidated buildings once stood. It’ll soon be home to Lantana Way, a green space with a planned public art wall.

“We’ll work with the private sector to help make it better. We’ve got projects in the hopper.’’

“The city is making it advantageous (for businesses and homeowners) to come to north Huntsville,’’ he said. “For us it’s, ‘What can we do to make it easier?’ ‘’