MADISON — The 2019 Madison Chamber of Commerce Best in Business Awards may have been the most romantic awards presentation ever.

However, when Stephanie Johnson, owner of Compass Physical Therapy, presented Michael Johnson, owner of Mosaic Audio Video Integration, with his Small Business of the Year trophy this year, she also gave him a big kiss, much to the oohs and ahhs of a flabbergasted audience! 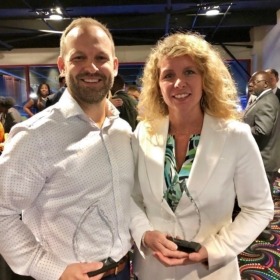 Michael and Stephanie Johnson keeping Best in Business awards in the family.

“Boy, I wish I had won that award,” someone in the audience piped up to uproarious laughter.

Few in the audience realized at the time that Stephanie and Michael Johnson are married, and both own award-winning small businesses in Madison. Earlier that evening, Stephanie accepted a trophy for the Best Medical Practice – less the kiss of course!

“I was thrilled to have been nominated but I never expected to win because the Small Business of the Year category is very competitive,” said Michael Johnson. “I was excited and honored to have won among so many deserving businesses here in our community.”

Johnson has been in the home automation business for more than 20 years but, five years ago, broke away to form his own company. Specializing in whole home and office automation including smart lighting, motorized window shades, multiroom music and audio, home theatre, cameras and surveillance, as well as Wi-Fi networks for both home and office conference rooms, Johnson said he wears the nickname “The Speaker Guy” as a badge of honor.

“People automatically think about what we do in terms of surround-sound and home theatre, but that is just a small part of what we can do,” he said. “If it’s technology-based electronics and automation, Mosaic Audio Video Integration can help you design and install it.”

In addition to residential, Mosaic does commercial work for companies in Research Park. He said Huntsville and Madison are great markets for technology-based systems because it is a well-educated community where people are in tune with what is available.

Stephanie has been a licensed physical therapist for nearly 15 years but bought the business six years ago, renaming it Compass Physical Therapy in 2017. She specializes in physical therapy for children ages 1 to 18 and includes rehabilitation for special needs children, traumatic pediatric injuries and rehab for school athletics and other injuries resulting from physical activities. 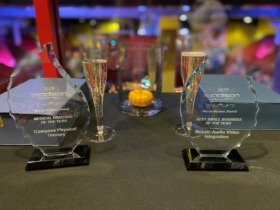 “Alabama is a ‘direct access’ state so anyone can come in and get evaluated without a doctor’s prescription; however, some insurance may require that you get some form of medical preauthorization,” Stephanie said. “If needed, we communicate with the doctor after they come in and let them know what is going on.”

Compass Physical Therapy is also engaged with the local schools. Madison Schools have health advisory boards in which they invite professionals in engineering, IT, and the medical fields into their classrooms to talk to students who are interested in those fields. Stephanie speaks to students and fields questions from them about prepping a career in physical therapy.

“The high schools are aware that we host students here so they can get their observation hours. It can help advance their professional careers.”

She said they also take on student interns when they can. “It’s our way of helping perpetuate the next generation of physical therapists.”

Michael’s expertise is on full display at Stephanie’s practice.

“Music and special lighting are important to inspiring and keeping children engaged during the rehabilitation process,” Stephanie said. “Michael has installed smart lighting and music in some of our work areas that can be adjusted from a tablet-like remote.”

From a business owner’s standpoint, she said her favorite feature is the one-button access to opening and closing her business every day.

“In the morning when I arrive, I usually have my hands full and all I have to do is push one button and the door unlocks and opens,” she said. “It turns on the lights and brings up our favorite TV station in the waiting room. When we leave at night, I push one button and it turns off the lights, sets the thermostat, and locks the door behind me.”

“Stephanie’s work with special needs children has a profound effect on people’s lives. She comes home at night talking about how she helped a baby learn to walk today,” said Michael. “I implemented home automation technology in the master bathroom of a wealthy homeowner that day, so I like to believe that good stuff rubs off on me just a little.”

Clearly it does. Three years ago, the Johnsons began hosting a joint annual fundraiser called Blues, Brews and Booze in which they choose a local charity for which they raise money. Among those charities are Kids to Love, Clothe Our Kids of North Alabama and BeArded Warriors.

“It’s important because the local Madison community has been so great to us,” said Stephanie. “We try find ways we can give back to the community and reach out to people who need help, It has grown from just a handful of supporters three years ago to over 4,000 participants this year.”

Both of the Johnsons give a shout-out to the Madison Chamber of Commerce.

“The Chamber brings Madison small businesses together for networking opportunities, and they really get the business community talking to each other, making it easier to work together when needed,” said Stephanie.

“Madison is a friendly Chamber, involved and engaged with all businesses in our area,” said Michael. “We get together on a regular basis to network and help each other grow. It really is a community effort and we are fortunate the Madison Chamber is so supportive of small business.”