Kicking off his fourth term as mayor of Huntsville, Tommy Battle delivered a virtual State of the City Address filled with optimism about Huntsville’s indomitable economic resilience; praise for Huntsville’s heroic perseverance and teamwork in the face of an unprecedented pandemic; and an in-depth look at multiple building projects and expansion across the city. 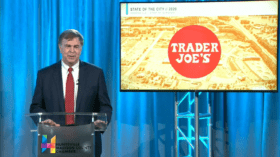 The long-awaited arrival of Huntsville’s most-requested retailer, Trader Joe’s, is opening in the MidCity District; and Google Fiber will debut 2 gigabit Internet service in Huntsville, making us a double-gig city.

“If 2020 were a fish, I’d throw it back,” Battle said. “But Huntsville still shows strong growth in every section of the city. In fact, we have claimed the construction crane as the new unofficial Huntsville city bird, perpetually populating our skyline.”

He said Huntsville entered 2020 with promise after “crushing it” in 2019 with $1.8 billion in economic development and capital expenditures circulating through our economy; and 3,025 new jobs – new opportunities for people to improve their lives.

“We had $1.9 billion in industrial capital expenditures and $1 billion in commercial, residential, and multifamily; and that’s in addition to all the expenditures that have occurred in renovations and rehabilitation projects,” Battle said. “We were off to a great start as Navistar announced it would double employment through a $125 million expansion to widen its truck portfolio; Blue Origin opened its rocket engine plant in Cummings Research Park to assemble the BE3 and BE4 rocket.

“Then it came to a screeching halt when the novel coronavirus tested our resiliency.”

But Huntsville was ready.

They leaned on experience from dealing with the H1N1 virus in 2009 and mobilized a response team of healthcare experts, hospitals, Emergency Management, HEMSI, businesses, and government leadership. 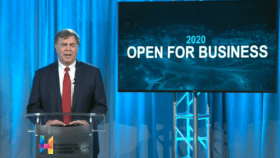 Through it all, City Hall and city municipal offices remained open for business. City leaders felt it was important to be there for the people they serve at a time when so much seemed to be out of order, City Hall could be the symbol of normalcy.

“Huntsville is defined by our perseverance, our resilience, and our remarkable ability to adapt and change,” Battle said. “We didn’t wait for the federal government for a handout. Our local businesses pitched in to help and this community came together in partnership to move us forward.

“We were willing to show up for work and use new health and safety protocols to remain on task. We separated; we masked; and we sanitized.

“Telework became the norm, and Zoom became our conference room, and that is how we have been able to keep businesses open, let children go to school, and enjoy some sense of normality until a vaccine or treatments are approved and available.”

While he said area hospitality, restaurant and entertainment industries took the hardest hits, he hailed health care workers and first responders who put their lives on the line to care for others. He cited Crestwood Medical Center and Huntsville Hospital for securing test kits, PPE, and medicine. He also reassured there is a COVID-19 response team already working on a plan to distribute a vaccine when it is available.

As the pandemic raged on, Huntsville faced down the summer of civil unrest by engaging groups in dialogue about how to be a more just and equitable city that ensures opportunity for everyone. 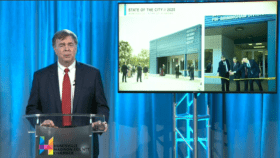 They began restructuring the City’s Office of Multicultural Affairs into the Office of Diversity, Equity and Inclusion, expanding staff to represent the community’s need for law enforcement.

“I have the utmost confidence in our Chief Mark McMurray and the men and women of the Huntsville Police Department who served as officers on the front lines,” Battle said. “In the past 10 years, this Department with input from our community, has led the way in police reforms with a commitment to constitutional policing, escalation techniques, implicit bias training, and a commitment to a certified mental health crisis intervention team.

“Huntsville law enforcement has instituted dashboard cameras in police vehicles and body cameras on officers. Our homeless taskforce built community partnerships, and we have increased diversity in its ranks.

“Furthermore, a partnership between Huntsville police and the FBI is funding a new state-of-the-art joint training facility with law enforcement across the region so they will receive the best training possible to keep themselves and the public safe.” 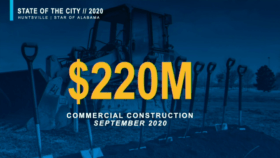 And when all was said and done, COVID-19 may have rocked the country and brought momentum to a screeching halt but, despite the hit, by the end of this year and still in the midst of a pandemic, Huntsville will have created 960 jobs and put $2.1 billion in new product on the ground in Huntsville.

“In September alone, the Inspections Department issued permits totaling $220 million,” Battle said. “In that $220 million was new commercial and residential construction setting a new benchmark, an all-time historic record month for the city of Huntsville in capital investment.”

Battle pointed to the projects that were already in progress and continued throughout the pandemic including the improvement and rebranding of Huntsville’s public transit system; the opening of Cecil Ashburn Drive and the movement into the final phase of widening Zierdt Road. They are continuing to widen Research Park Boulevard to six lanes; began construction on the northern bypass, as well as the final overpass on Memorial Parkway at Mastin Lake Road; and they will finish the Greenbrier Parkway in the Mazda Toyota area.

“To sustain this kind of growth, you have to have a plan in place and we do,” said Battle. “We’re investing in infrastructure to ensure our existing neighborhoods receive the same attention and the same upgrades as our newer developments.”

Projects such as the Johnson Legacy Center on the site of the old Johnson High School and an adjacent residential development; the Mark Russell Recreation Center on Taylor Road; and the Sandra Moon Community Complex are all in progress or nearing completion.

A ribbon-cutting ceremony is planned in late October for the William Hooper Councill High School Memorial Park next to the downtown public library. It pays tribute to the legacy of Huntsville’s first public school for African American students and will incorporate another green space filled with public art.

More public art will appear at the new Lantana Park, a once blighted property on North Parkway that will soon house a walking trail and sculptures that will create a colorful gateway into North Huntsville.

A new fire station for the westernmost part of the city and increased infrastructure services including repaved roads and parks are ongoing.

“It is urban living at its best,” said Battle.

Just west of downtown, a $1.3 million choice neighborhood planning grant is funding a plan to revitalize and transform Butler Terrace and its surrounding area between Clinton Avenue and Governors Drive.

“Growth is really everywhere in the city from a 400,000 square foot warehouse at SouthPoint Business Park on I-65 to projects in Haysland Square, Governors Drive, Mastin Lake, where a 140,000 square-foot high tech distribution center is being built.

“And of course with so many new people moving into the Huntsville area from across the U.S., the addition of Trader Joe’s at MidCity is a big win for the region and we are honored to finally welcome them to our community,” Battle said.

Industrial investment keeps coming as Mazda Toyota announced another $200 million investment at the automotive plant, and Toyota’s engine plant is planning the county’s largest solar powered plant at its campus in North Huntsville.

“The city is well positioned for 2021 and we’re moving forward with a balanced budget and another year of AAA credit ratings,” Battle said. “We will use this stellar rating to fund in 2021, our new City Hall, a world class amphitheater, a new fire station for Limestone County, and many other quality of life amenities on a global scale.

“There will still be some hardships into 2021, but we will move forward with our plans and dreams – even if some of it will be in an abbreviated way – but there’s no place I would rather be in a pandemic than right here in our great city.”