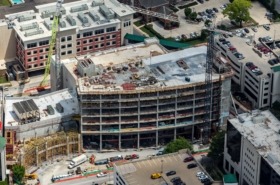 The milestone, often called the “topping out,” also signifies that the 375,000-square-foot tower now stands at its ultimate height – 150 feet – at the corner of downtown Huntsville’s Gallatin Street and St. Clair Avenue, occupying the entire city block. Once it is complete next summer, the tower will be the largest project on the campus in nearly four decades.

“As a longtime partner and friend of HH Health System, we are humbled to be a part of the HH Orthopedic and Spine Tower project,” Robins & Morton Huntsville Division Manager Mitch Coley said. “The facility will lead healthcare in the rapidly growing North Alabama area into the future and improve the quality of life for everyone in the region.

“The impact on the community where we live and work will be great, and we can’t think of a better way to give back than to be a part of this milestone project.”

Robins & Morton is serving as the construction manager and Chapman Sisson Architects designed the facility.