Hold on to your preconceived ideas of the need for a “brick and mortar” storefront operation. 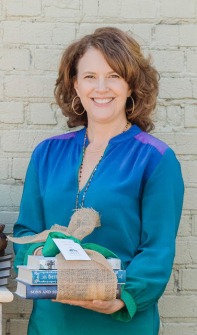 With The Snail on the Wall bookstore, Huntsville’s Creative Entrepreneur of the Year winner, Lady Vowell Smith, has developed the perfect mix of online sales and pop-up events.

With razor-thin margins on books, coupled with major competition from the “Big Box” bookstores, community bookstores have had a hard time surviving, even in the best of times.

Smith’s business model has low overhead and high flexibility, but also offers the same services that a “brick and mortar” independent bookstore would customarily provide: a curated selection of books, personal recommendations, gifts for readers, author events, and community partnerships with schools, organizations, and businesses.

A lack of small local independent bookstores – a place where readers and authors could meet and share ideas is what prompted the creation of The Snail on the Wall, she said.

“I knew that Huntsville was missing out on nationally known authors coming to our city,” said Smith. “They were stopping in Birmingham, Nashville, Atlanta, and every place around us because they had independent bookstores and Huntsville didn’t.

“I didn’t know anything about bookselling, so I thought I would experiment with a ‘store without a store.’ Then, once the model started, the delivery service worked, and it reaches more people than it would if it were in one fixed location.”

During a pandemic in full swing, bookstores around the country are struggling, just like other small businesses.

“I don’t want to say business is better because when I compare it, it’s different,” said Smith. “I’m probably working harder for less; everything is just a little bit harder right now.”

Otherwise, business is good. “It’s going really well for the holidays, it’s extremely busy, a lot busier,” said Smith. “With COVID, a lot of people discovered my business because it has a delivery service. Books were one of the things that were so popular when we were all staying at home. I do think a lot of people discovered The Snail on the Wall as a ‘delivery to your doorstep with no contact’ delivery.”

The Snail on the Wall has hosted several large events in the Thurber Arts Center at the Randolph School in partnership with the Huntsville Library Foundation.

As a key component of Smith’s bookstore business model, author events are something that have been sorely missed. Author events draw in big crowds.

In March, The Snail on the Wall hosted “Sean of the South,” author and podcaster Sean Dietrich. Last year, it was former journalist turned author Lisa Wingate.

Smith has hosted events at a variety of places, including breweries, such as Fractal and OTBX, which helps to promote the wide assortment of partnerships. Last November, in partnership with Rocket City Mom, The Snail on the Wall hosted Ann Vogel, a nationally known podcaster and author, at the Stone Event Center,

“I often try look for partners when I do an event because it increases the reach,” said Smith. “That’s been part of the Snail’s business from the start, to partner with other businesses. Find places to pop up, find places to do events, that kind of thing.

“I’ve hosted at Roosevelt & Co. (on Clinton Avenue), which is where my pop-up store is right now. This is the third year that I’ve done a holiday pop-up store through the whole month of December. I have it all set up and people can come shop anytime.”

Smith said she values the collaboration that comes with partnership.

“It’s really the only way I could have done this non-traditional business model and the only way it would probably work, not just to get the word out, but to help with the logistics and the venues,” she said. “Most of the places and partners have found that it’s just as beneficial for them, if not more.

“Because of COVID, there is a lot of awareness that we need to support small businesses. I do think people are shopping small when they can.”